‘I’m the only woman to slap Akpaibo ‘- Joy Nunieh

She made the disclosure while appearing on Arise Tv, on Monday . Nunieh claimed she is the only woman that has slapped the former Governor of Akwa Ibom State, also listed some hotels she allegedly had meetings with him.

Nunieh further alleged that Godswill Akpabio wanted her to take a blood oath of asecrecy in Abuja before initiating her confirmation as the substantive head of NDDC.

She said, he thought he could use me. He doesn’t know I’m a Port Harcourt girl. Port Harcourt girls are not moved by moneya. He told me he would make a substantive Managing Director.
Nunieh had accused Akpabio of removing her from office because she refused to do his alleged fraudulent bidding.
Reacting, the minister claimed that the former NDDC boss had character problem. 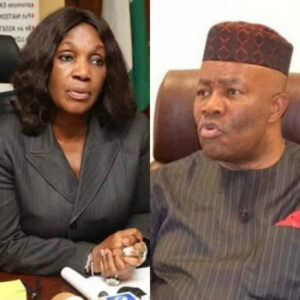