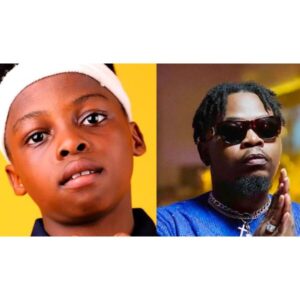 NOT many people know or have heard about an 11-year-old rapper, Hassan Al-Hameen popularly known as Harmeen. But he is silently and steadily carving a niche for himself in the music industry with his rap skills.

The young boy who started music at the age of five at 11 has won some awards and recognitions for his talent.

According to Harmeen,  aI started music professionally at the age of 9 in 2018. My dad wrote some freestyle for me. He got me pushing until one day he went online and saw a post by Reminisce who was giving upcoming artists opportunities to freestyle in his new beat, titled ‘Ajigijaga’. He downloaded the beat and woke me up around 3:AM to notify me about the competition. He asked if I could do my version, I said I would love to but not at the moment because I needed to sleep, but we agreed that once I was back from school we would do it. I made my own video. He uploaded it on my page on Instagram (@Harmeen_official) and tagged Reminisce and others based on the instructions to follow.

Surprisingly, around 7:PM after we uploaded around 4pm, someone called my dad that Reminisce had reposted my freestyle and that it’s trending. My dad logged in immediately and he received a message that I was one of the winners and my dad should bring me to Ikeja to claim the ₦100, 000. My dad used some of the money to buy me some school materials and we used the remaining money to go to the studio to record my first single titled, ‘Omo Naija.’

Harmeen said so far so good he has recorded 11 tracks with three videos but my latest song trending right now is titled ‘Rapability.’ The video was shot by my dad because he’s a cinematographer,” Harmeen recounted how the journey began. He is signed to Efoski Entertainment, a record label under the direction of his father, who was also a rapper.”

Presently, he has recorded eleven tracks and three videos under the label, Efoski Entertainment. He is planning to drop an EP of 10 tracks titled ‘Rapability’ by December of this year. “

Harmeen boasted, I love Olamide, Reminisce and Davido. I love their music and I do listen to them from time to time. But I’m the future king of rap. I’m here to take over from Olamide the Baddoo.”

Presently he has won awards like Murk Reminisce competition in 2018, the Kid Entertainer of the Year Award by Star Kids Award. In 2019, he won a split air conditioner from Gree AC presented by HipTV.

“My musical career can’t affect my education, because there is time for everything. I only concentrate on music during weekends and during holidays at the moment. Education and music are both important to me and I know how to balance both. During weekdays I focus on my education, no music, no show but during weekends, after I have attended to my school assignments, I do focus on my music, going to the studio. In 10 years time, I want to be an established rapper in Nigeria and also impact the life of upcoming Talented Artistes while using my music,” he said