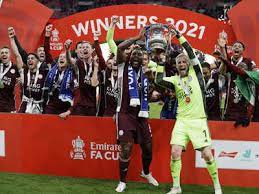 The team broke an age-long jinx against Chelsea after Belgian midfielder, Youri Tielemans, puts the Brendan Rodgers team ahead in 63 minutes and supported his colleagues to prevent their opponent from equalizing the game.

Following the victory against the London club, Leicester City joined other teams that had lifted the famous old trophy in their 137-year history.

During the match played at Wembley Stadium in front of 20,000 fans, while Ndidi pocketed 90 minutes of play, his fellow countryman, Iheanacho, was not that luck following his substitution over tactical changes by the team’s manager.

Tielemans produced one of the great FA Cup final goals to give Leicester City the trophy for the first time in their history with victory over Chelsea at Wembley.

The Belgian settled a closely contested encounter with a spectacular right-foot drive that flew beyond Chelsea goalkeeper Kepa Arrizabalaga into the top corner from 25 yards in the 63rd minute.

It sent manager Brendan Rodgers down the touchline in celebration although Leicester City’s fans – inside Wembley as 21,000 supporters formed the biggest attendance since lockdown – had to survive a nerve-jangling closing phase before they could celebrate the win in their first final since 1969.

The Foxes were indebted to two crucial saves from keeper Kasper Schmeichel, who turned former Leicester defender Ben Chilwell’s header on to a post then produced an even better stop to turn Mason Mount’s powerful shot wide.

And in a final act of drama, Chilwell thought he had equalised in a last-minute goalmouth scramble before it was ruled out by the barest of margins following the intervention of VAR.

Leicester closed out the win to spark emotional scenes as those inside Wembley rejoiced in a landmark victory.