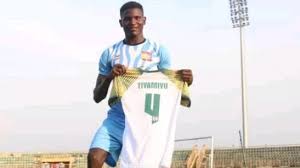 IGP’s order came barely an hour after residents and officers of Nigerian Police clashed during a protest codename ‘end SARS’ on Tuesday to express their displeasure over law enforcement officers brutality.

The protest, theguild gathered, claimed lives and loss of property worth millions of Naira in Sagamu, the home town of British-Nigeria boxer, Anthony Joshua.

Adamu, in apparent response to the breakdown of law and order that had trailed death of the footballer last Saturday, said Deputy Inspector General of Police (DIG) in-charge of Force Criminal Investigations Department (FCID) Anthony Ogbizi, will take over the investigation immediately.

In a statement by Force Public Relations Officer, Frank Mba, the IGP, who described the death as regrettable after reviewing daily reports of major crime incidents across the country, assured that everyone responsible for his death will be prosecuted.

​Meanwhile, the IGP while commiserating with the family and friends of the deceased, calls for calm and assures that justice will be done in the matter, reiterating that any person found culpable will be brought to book.