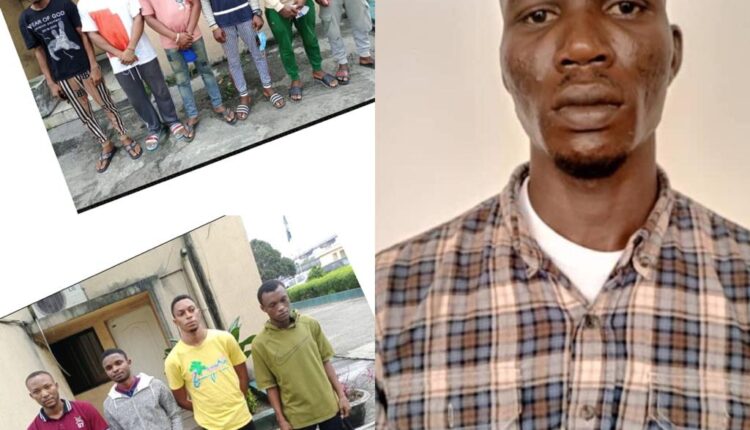 A Federal High Court sitting in Port Harcourt, River State has sentenced one Destiny Ighalo and ten other internet fraudsters to various terms of imprisonment over offenses bordering on impersonation and internet frauds.

The suspects said to be all-male were arraigned before the court presided over by Justice Adamu Mohammed on a one-count charge bordering on impersonation and obtaining by false pretense.

The count charge preferred against Samson reads: “that you, Anhwo Samson (aka Anhwo Samcity), Adelakun Abdulkareem (aka Terry Walker), Omebu Happy (aka Christ David), Imaah Joseph (aka Pietro Jones) Enofe Michael (aka Charlotte Crypto B.T.C Dan Trader) and Akpowowo Favour Omanufogho (aka Prof. Melisa Dan) on or about the 10 days of July 2020 at Efemena Close, Ozoro within the jurisdiction of this Honourable Court did conspire to defraud by sending electronic messages materially misrepresenting facts to white women with intent to defraud them and thereby committed an offense contrary to Section 27 (1)(b) of the Cybercrime (Prohibition, Prevention, Etc) Act, 2015 and punishable under Section 14(2) the same Act”.

In his judgment, Justice Mohammed found the defendants guilty and thereby, sentenced the fraudsters to various terms of imprisonment.

Judge Mohammed sentenced Destiny Ighalo to two years imprisonment with an option fine of N500,000. Ighalo was ordered to forfeit a Luxus SUV 330 model, laptops, and phones to the federal government.

The judge further ordered all the convicts to undertake in writing to be of good behavior ​forthwith.