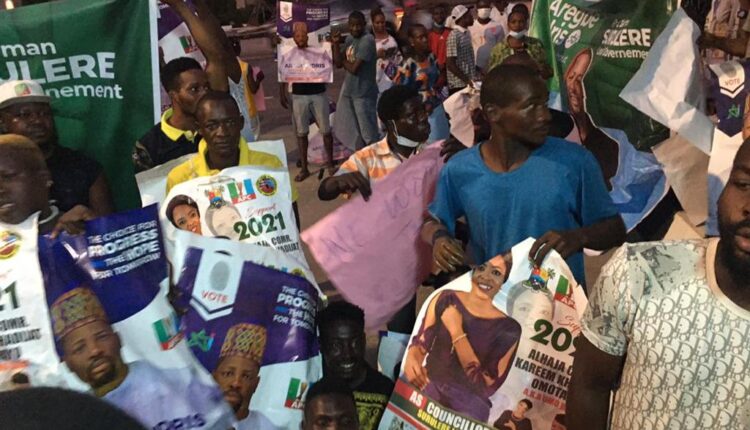 The All Progressives Congress (APC) Lagos State Chapter Youth Organising Secretary and Surulere council chairmanship aspirant, Idris Aregbe, and young men and women from his supporting group, across all walks of life, particularly in Surulere have taken demonstrations to APC National leader, Bola Tinubu, residence in expressing their dissatisfaction against outcomes of the party’s primary elections conducted over the weekend in the state.

Their agitations, according to them, were necessary to register their displeasure against series of irregularities that characterized the just concluded council primary elections of which was said to have been marred by violence.

They claimed that elections did not hold across nine wards of the local government following attack on members of the party by hoodlums who invaded the wards leading to the deaths of two young men whose lives were cut short by thugs said to have been hired by one of the council leaders to disrupt election process despite several warnings that the exercise should be made free and fair.

Addressing the protesters, Tinubu promised the aggrieved youths including Aregbe of rewarding them politically, adding that though he was yet to get full briefing on the election outcome, he would ensure justice was done in the just concluded council polls.

Going back memory lane, the former Lagos State Governor explained he shared a father-son relationship with the aspirant and that he would ensure the issues raised are addressed through the party’s organ set up to manage election related crisis.

Tinubu said that he was aware of pains and plight of people of surulere, APC members and supporters and promise to ensure that their struggle were rewarded and does not go in vain.

He also assured that other aspirants in Surulere are well compensated at the council level, urging them not to be discourage and that what has happened was part of life.

“You win some you lose some. It is not everything you will have to win. When loss come accept it and when victory come, celebrate and maximise it. Your winning is closer,” he said.

The APC National leader urged the youths to stay calm, shun violence and return to their communities peacefully and remain law abiding citizens of Lagos, adding that they maintain their spirit of togtehrness and that of patriotism .

Herdsmen kill over 10 villagers during fresh attacks in Plateau