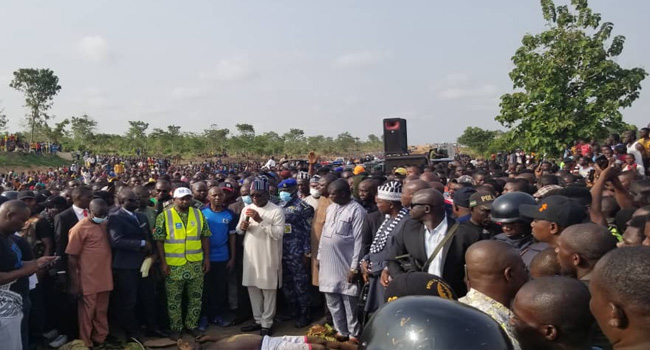 Movements and other activities on Markurdi-Lafia Federal Highway have been brought to a halt after Internally Displaced Persons (IDPs) from the Abagana camp in Benue State stormed the road to protest against the recent attack on their camp and killings by herdsmen.

During the protest, the aggrieved camp members blocked the Markurdi-Lafia Federal Highway and laid the corpses of the victims on the road.

Confirming the attack, the state’s Governor, Samuel Ortom, said that suspected herdsmen, who attacked the IDPs camp left seven persons dead and many others injured.

Ortom stated this when he visited the camp, where the IDPs were already protesting the attack by blocking the Makurdi-Lafia road.

The governor said that the attacks were becoming unacceptable and that it was saddening the Federal Government was yet to allegedly take concrete steps in addressing the menace in Benue and other troubled states.

He also said that more than 70 people were killed in Guma, Makurdi, and Gwer West local government areas, of the state in the last two weeks.

“You have all seen what is happening within the last two weeks. We have lost over 70 people in Guma, Makurdi, and Gwer West LGAs alone, in addition to what you have seen here.

“Many are in the hospital apart from the seven that were killed. But I want to say that our patience is being overstretched in spite of our preaching of rule of law and due process. You can see that the people are fed up,’’ the statement said.