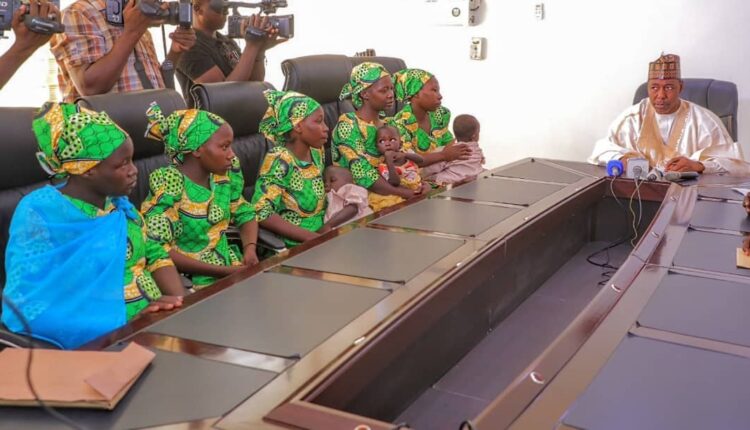 No fewer than 15 Borno State residents, including six women and nine children abducted by Boko Haram insurgents between 2020 and 2021 at different churches located in Borno and neighboring Adamawa State have escaped from captivity.

Giving update on their return while they were presented to Borno State Governor, Babagana Zulum, the state’s Commissioner for Women Affairs and Social Development, Zuwaira Gambo, said that the women trekked for six days from a forest in Buni Yadi controlled by the Boko Haram faction group, ISWAP to Damboa.

According to the Commissioner, the women took advantage of the recent surrender by the dreaded Boko Haram sect to escape from their captives and presented themselves to the security operatives who later handed them over to the Borno State Government to be reunited with their families.

In his remarks, Zulum, who commended the women for their bravery, urged residents to intensify prayers for the total return of peace to Borno and other parts of the country.

The governor also assured them and other residents of government’s commitment to ensure other people in captivity are released and returned back to their families.

“All praise be unto Allah for bringing us our daughters abducted in Chibok back. It is our sincere hope that all those in captivity will find their way back home. Both the Federal and State Governments, including the security operatives are working tirelessly to ensure that no person remains in captivity. We are doing all within our means to ensure total peace is returned back to our State and all other parts of the country. Zulum said.

However, the governor presented the women to Borno State CAN Chairman, Rev. Mohammed Naga accompanied by the CAN Secretary, Chibok Local Government Chairman, traditional rulers from Chibok and other top Government officials who are indigenes of Chibok.