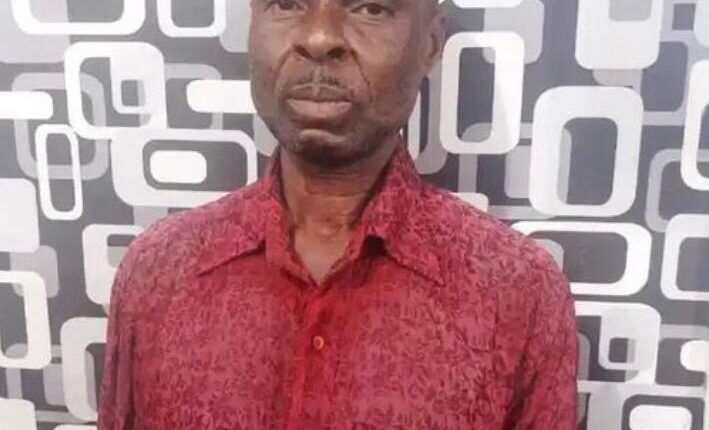 A 49-year-old man, Ubong Akpan, who was arrested and detained by the Nigerian Police, Ogun Command, for allegedly defiling his 12-year-old daughter (name withheld), has said that he engaged in the act after his wife of many years appeared too old and was no longer sexually attractive.

Akpan, as gathered, had allegedly been engaging in the acts for over five years, sexually defiling his daughter a few weeks after the girl celebrated her seventh year’s birthday.

The 12-year-old girl, who was said to have been threatened not to speak out by the father, on Friday, April 2nd, approached the Itele-Ota Divisional headquarters and reported the case to the law enforcement agency for investigations.

After a thorough engagement, the law enforcement agency accompanied the victim to her parents’ house, arrested the father, and detained him for allegedly engaging in the act that was classified as a criminal offense in the state.

The suspect, when interrogated by the men of the operatives, claimed that his wife’s appearance was the reason for his actions, saying he began to have sexual activities with his daughter after the wife appeared sexually unattractive to him.

Speaking on the father’s detention, the Ogun command spokesman, Abimbola Oyeyemi, disclosed that the Commissioner of Police, Edward Ajogun, has ordered the immediate transfer of the case to the family support unit of Ota Area Command for further investigation and prompt prosecution.

According to him, the commissioner has also directed that the victim be taken to the General Hospital for proper medical treatment and to obtain further evidence against the suspect.

Oyeyemi explained that the victim decided to report the case to the law enforcement agency after she could no longer bear the burden of her father who started defiling her over five years ago.

The police spokesman added, “Upon the report, the DPO Itele Ota Division, Monday Unoegbe, detailed his detectives to the scene where the suspect was arrested.

“On interrogation, Akpan confessed to the commission of the crime, claiming that his wife is appearing too old, and she is no longer looking attractive to him”.