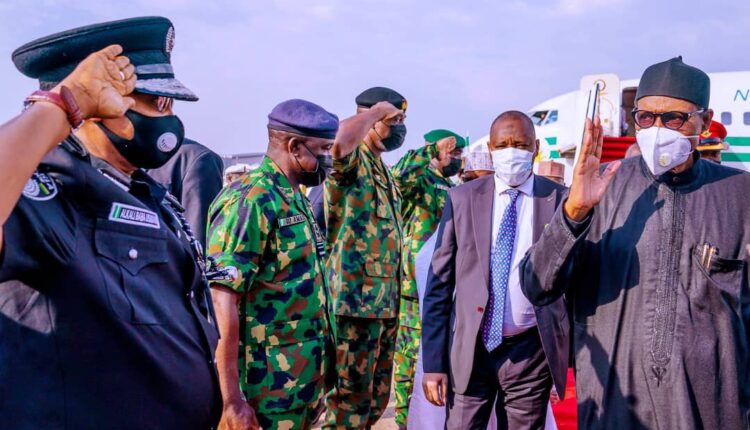 President Muhammadu Buhari has disclosed that the choice of Usman Baba as replacement for former Inspector General of Police (IGP), Muhammad Adamu on Acting capacity was on merit and not on religious or ethnic bases.

Buhari added that  Baba was picked after a thorough investigation that further revealed his managerial skills and other qualities that had distinguished him over the years in service.

While explaining what transpired during investigations, Buhari stated that he discoveredl the new IGP possessed qualities that he needed from anyone that must lead and restructure the police to become the pride of the country.

The president made the disclosure on Thursday after returning from his over two weeks foreign trip to London, United Kingdom (UK) where he met with medical experts for a checkup to ascertain his health condition.

He made the clarification barely nine days after relieving Adamu of his duties and appointed Baba to lead the law enforcement agency in the drive towards tackling insecurity across the country.

The president, while noting that he has absolute belief in him to ensure enforcement of law and order, assured Nigerians that more policies and moves would be carried out to ensure a conducive environment for all.

Buhari said: “We had a committee that presented all eligible candidates for the job to me and after a thorough investigation, I discovered that Baba had the qualities that we wanted in anyone that must lead the country’s law enforcement agency.

“Baba understands his job because, over the years, he had been undergoing different necessary training on the job. And from all the training and years in service, he has garnered all the experience. We have high expectations from him”, the president added.

Until Baba’s appointment by the president, he was the Deputy Inspector-General of Police, Force Criminal Investigation Department, Force Headquarters.

The Acting IGP was born on 1st March 1963 in Gaidam, Yobe State. He enlisted in the Nigeria Police on 15th March 1988. He holds a Teacher’s Grade II Certificate (TC II) from Teachers College, Potiskum, Yobe State in 1980.

He obtained a BA (Ed) in Political Science from Bayero University, Kano in 1985. He has a Masters’ Degree in Public Administration (MPA) obtained from University of Maiduguri, Borno State in 1997.

It would be recalled that rather than approve Inspector-General of Police (IGP), Muhammadu Adamu, retirement after statutory 35 years in service, Buhari had given Adamu another three months to pilot affairs of the law enforcement agency and prepare a possible successor for the office.

The extension of tenure was announced by Minister of Police Affairs, Maigari Dingyadi, during an interview with newsmen on February 4, 2021 at the State House, Abuja.