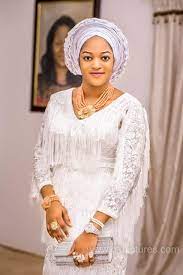 Less than 24 hours after parting ways with the Ooni of Ife, Oba Adeyeye Ogunwusi, the former wife, Naomi Silekunola, has disclosed that she would be returning to full-time evangelism, to complete the task God handed over to her.

Silekunola, who described the period after her divorce to the monarch as a new season, added that the period would be dedicated solely to participate in God’s activities across the country.

The former queen, meanwhile, appealed to her supporters and other stakeholders particularly custodians of the Yoruba culture to embrace peace with the understanding that the marriage led to the birth of her first child.

She stated these through a statement released on her official social media handle on Thursday shortly after dropping her title as the wife of the Yoruba monarch in the country.

According to her, (It) is God’s way of saying I know about it all. In situations like this, there will be aggrieved persons. I, at this moment, appeal to all parties involved to allow the peace of God with the consciousness that there is a lovely little boy between us.

“I thank all of my prayer partners and loved ones. I remain committed to all of my projects, charity work, and ministry. In this new season, I shall be focusing on God only”,

It would be recalled that the 28-year-old announced that she has decided to leave the monarch after efforts to ensure that the marriage work proved abortive even after she delivered a son for the traditional ruler.

She alleged that the public posture of the monarch was different from his true self which had become a major issue since her decision to become Ooni’s wife three years ago.

After dropping the status of the monarch’s wife, Silekunola stressed that she has embraced the status of “Queen of the people and mother of my adorable Prince”.