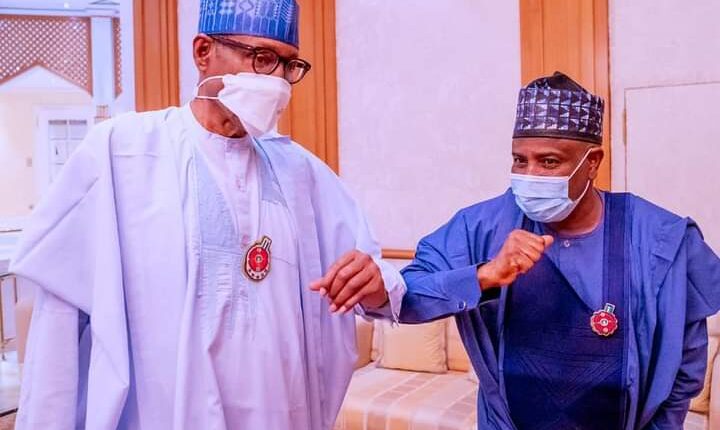 President Muhammadu Buhari ha promised to boost security and restore peace across the troubled states and regions in Nigeria, saying we will not rest untill this is achieved.

Buhari said that his administration would continuously commit both human and materials required to achieve the desired and lasting peace and harmony within the country.

He gave the assurance yesterday during a meeting with the Sokoto State Governor, Aminu Tambuwal, at the presidential Villa after the governor briefed him of the security challenges confronting his state and the northwest region.

While commiserating with the family of the deceased, the president stressed that all efforts would be made to ensure that Nigerians live and work without fear in any part of the country.

Buhari noted that his administration would ensure that the loss of lives and property suffered by Nigerians were not in vain going forward.

According to him, Governor Aminu Tambuwal briefed me tonight on the security situation in the State. I assured him of the commitment and support of the Federal Government, towards the full restoration of peace and security.

“I have the full assurance of our security chiefs that these heartless bandits and criminals will be smoked out, wherever they might be, and brought to justice. We will not rest until this is achieved.

“May the souls of the victims Rest In Peace. Amen. My vow is that this tragic loss of lives will not be in vain”, the president added.

Earlier, pursuant to the provisions of the 1999 Constitution and to further give effect to the process of proclaiming bandits as terrorists, Tambuwal urged the president to declare a full scale state of emergency in all areas where criminals, so determined, are domiciled.

This, according to him, would be to enable the Armed Forces to carry out their operations without let or hindrance in all enclaves affected by the declaration.

These operations, once conceived and ready for execution, “should be carried out simultaneously in the states where the terrorists have strongholds, such as , Sokoto, Zamfara, Katsina, Kaduna, Niger and Kebbi; as well as elsewhere, where the criminals have hideouts,” he said.

Tambuwal further urged the President to give premium to the deployment of more manpower to all beleaguered areas just as he advocated for the procurement of sophisticated equipment, particularly, modern technology- which use is now centered around the deployment of drones globally.

He also appealed to the President, to consider popular opinions suggesting the recall of retired personnel for engagement in the war against terrorists and the recruitment of more personnel in all the security services.

In view of the security situation in the Sahel, which has escalated tension in the sub-region, the need to ask the Economic Community of West African States (ECOWAS) to seek extensive cooperation with the United Kingdom, France and the United States of America on security issues was also suggested by the Governor.