A pro-democracy group, Human Rights Writers Association of Nigeria, HURIWA, has carpeted the Inspector General of Police(IGP),Mohammed Adamu for branding armed bandits in the North as freedom fighters.

HURIWA, condemned the decision by some northern governors of Katsina, Zamfara and Sokoto States to negotiate with armed Fulani bandits and said the bandits are responsible for hundreds of deaths and the destruction of property in the states.

The rights group accused the Inspector General of Police, Mohammed Adamu of choosing to ‘wine and dine’ with armed bandits rather than wielding the big stick against the lawless mass murders in the North West of Nigeria.

In a media statement jointly signed by the National Coordinator, Comrade Emmanuel Onwubiko and the National Media Affairs Director, Miss. Zainab Yusuf, respectively and made available to news houses,  said the interview alleged that police chief supported the ongoing unconstitutional unholy communion between Northern State governors and armed bandits will go down in the history of what would be left of Nigeria as the darkest period of the Nation-state because it is inconceivable that an officer of the law would boldly defecate on top of the sacred laws of the Country.”

“Let it be known to the current IGP Mohammed Adamu that his latest statement equating criminal armed mass killers as same as the Niger Delta agitators is not only disingenuous, pedestrian, spurious, puerile and myopic, but it is a direct affront to the constitution of Nigeria,”the statement reads.

”It was absolutely wrong to have compared the Niger Delta agitators who took up arms to compel the multinational crude oil producing entities to stop polluting and destroying the ecosystem and the overall environments with pure brigands and armed bandits in the North West who have no cause for their odious, atrocious and totally unlawful actions of killing children, women and old people all in the name of seeking to obtain the unlawful opportunities of dialoguing with politicians for financial benefits. 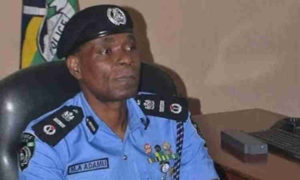 It is so wrong that the IGP is being allowed to defecate on the constitution. This trend of thought is similar to a victim of rape championing the cause of the rapists.It is totally incorrect to compare Niger Delta agitators with armed bandits of North West unless the political class in the North alongside their allies in the security forces are now accepting the responsibility for setting up the bandits in their bid to win big compensations for the criminals,” the group said

“The Niger Delta agitators fought for a just cause and were never known to have killed civilians. Niger Delta is the region that has provided 98% of the mainstay of Nigeria’s economy by way of crude oil resources. The environment was devastated and the people whose livelihoods were devastated by the activities of crude oil explorations demanded for justice. Why will the IGP compare these freedom fighters that killed no civilians to armed bandits of North West who killed hundreds of their own people?”

HURIWA. therefore, demand the sacking of the IGP Mohammed Adamu for playing the role of the advocate for Northern armed bandits in direct contradiction with the constitutional provision which necessitated the creation of the police as an institution of law enforcement”.

Similarly, the right group also described the budget of N100 billion proposed for the implementation of the National Livesstock Transformation Plan as an attempt by the central government to grant compensation package to members of the armed Fulani herdsmen who are nothing but terrorists that ought to be prosecuted and locked up for killings and destruction of farmlands and farmers including Catholic priests in all parts of Nigeria.

HURIWA said that the proposal submitted on Thursday to the National Economic Council by its Sub-Committee on Farmers/Herders’ crisis is a direct affront to constitutionalism because the central government plans to bribe aggressors whereas the victims of the terror attacks by armed Fulani herdsmen are left to their fate and to wallow in poverty and want.

” HURIWA is of The opinion that the NEC meeting presided over by a severely incapacitated and weakened Vice-President Yemi Osinbajo at the Presidential Villa, Abuja is simply an efforts to smuggle from the backdoor the RUGA SETTLEMENT PROGRAMME for Fulanis which most Nigerians in the South and parts of Northern States especially in the North Central states rejected. We read that the Chairman of the sub-committee and Governor of Ebonyi State, Mr Dave Umahi, made the presentation to NEC. Also disingenuously, Mr. Umahi explained that contrary to the widely held belief, the NLTP was not about cows alone but had three planks, including care for persons displaced by farmers/herders’ crisis and education programmes.

”He also repeated the propaganda lines of the Presidency that states are free to use any animals of their choice in implementing the programme. It’s a big shame that the governor said the committee proposed that the Federal Government would bear 80 per cent of the N100bn, while participating states would support with the balance of N20bn and land for the programmed and added that the programmed remained voluntary and would accommodate only states that expressed participation interest”.

The group , therefore, called for a discontinuation of the discriminatory policy of rewarding armed Fulani herdsmen for their criminal activities of killings of farmers and destruction of communities all across Nigeria.