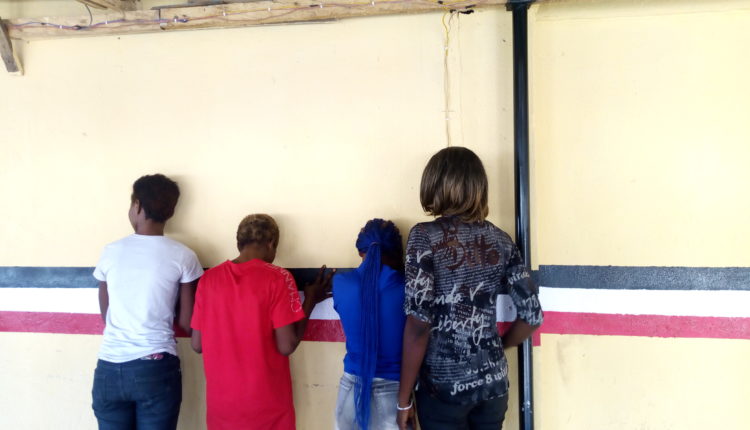 No fewer than five ladies have been arrested by Nigeria Security and Civil Defense Corps (NSCDC), Lagos Command when it uncovered a human trafficking ring linked to Mali.

The Guild gathered that arrest was made on Wednesday at a building owned the ring leader in Abuke Oku community where the victims were found following investigations and undercover operations carried out by NSCDC in efforts to guarantee safety of lives and property.

The leader of the ring, Omowunmi, confessed that she had worked as a sex worker in Mali for two years and returned home after she got tired of the lifestyle.

Months after, she decided to return to Mali and allegedly recruited Amaka and Anuoluwapo, to accompany her to engage in prostitution.

Omowunmi, a mother of one, narrated: “Even though the Cefas is not valuable like the naira, it is easy to make more money there because they pay more. And when I got tired I decided to return home”.

“She explained everything to us,” Amaka said,” and we agreed. We know that we will work to pay our agent there, but we will also make our own money.”

During an interview with our correspondent, Joy and Victoria revealed that they were sent to Lagos from Edo State by Joy’s boyfriend, Favour Owoke, who the corps disclosed is still at large.

Joy and Victoria explained that this was not their first rodeo as they had been sex workers in Mali for a while before coming back home to give birth to their children.

Both mothers of one had concluded plans to leave for Mali when an argument ensued between them and the leader, Omowunmi.

The argument between them started when Joy allegedly demanded N10,000 from Omowunmi to send to their families for child upkeep.

Joy said: “I asked her for money to send for me and Victoria’s child feeding and she said no, she doesn’t have. So I said you will make money on our head but you cannot do this one for us so we are not going to Mali again”.

“On the way going, because we did not have money for transport, I and Victoria were just standing by the road looking for any help when one man asked us what happened and we explained not knowing that he is an officer”, she added.

NSCDC Lagos Commandant, Cyprian Otoibhi, explained that since he resumed office about 4 months ago, over 50 of such human traffic cases had been nabbed and duly prosecuted by relevant agencies.

“We at the NSCDC are committed to the protection of lives and property and so we carry out various operations to fulfill our mandate. Investigations are ongoing as we will not look kindly on all forms of criminality. We have always, and will continue to work hand in hand with other agencies of government to secure the lives and property of Nigerian citizens.”

Otoibhi had encouraged the public to come forward with all relevant information without any fear as his office was especially responsive to citizens and residents of the state.

He stated that the suspects and victims will be handed over to The National Agency for the Prohibition of Trafficking in Persons (NAPTIP) for further investigation and prosecution.