Women group rallies support for Okonjo-Iweala ahead of WTO… 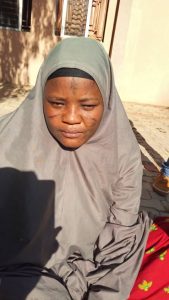 The Nigerian Police, Zamfara Command has arrested and detained a 30-yr-old woman, Fatima Lawali, after she was found with 991 ammunition by the law enforcement agency in the state.

Lawali was said to have been apprehended by the Police Tactical Operatives of the Command in collaboration with FIB/STS, the team going after bandits across the state.

The suspect under detention was said to be a major supplier of ammunition to bandits including a notorious bandit Kingpin, Ado Alero, and members of his gang, who have been terrorizing Zamfara and neighbouring states including in Zamfara, Sokoto, Kebbi, Kaduna, Katsina and Niger states.

Confirming the arrest and detention on Friday, Zamfara Commissioner of Police, CP Ayuba Elkanah, who revealed these while parading many suspects arrested by his men and other security agents, said that she was arrested yesterday around Gada Biyu area in Bungudu Local Government.

“While we parade some of the suspects arrested have completed their investigation, others who are undergoing discreet investigation could not be paraded now until investigation about their matter is concluded.

“Following interrogations of the suspects arrested, the Police Tactical Operatives carried out tactical operations at different bandit’s enclaves in the State.

“The operations led to a serious gun battle with the bandits where unspecified numbers of bandits were fatally injured with others escaped with possible gunshot wounds.

“10 assorted AK-47 rifles with magazines containing one hundred and 143 rounds of live ammunition were recovered from the scene”, he added.

Aside from her, the law enforcement agency disclosed that earlier, one Babuga Abubakar was arrested for allegedly collaborating with notorious bandits such as Lawali Na’eka, a ring leader operating in Maradun LGA and Almeriya, a notorious bandit’s kingpin operating in Bungudu axis of the state.

According to him, upon interrogation, suspect confessed that prior to his arrest by the Police, himself, Lawali Na’eka and Almeriya conspired and went to Wanke village in Gusau LGA with over one hundred (100) operational motorcycles where they rustled over two hundred and forty (240) cows belonging to different individuals”.