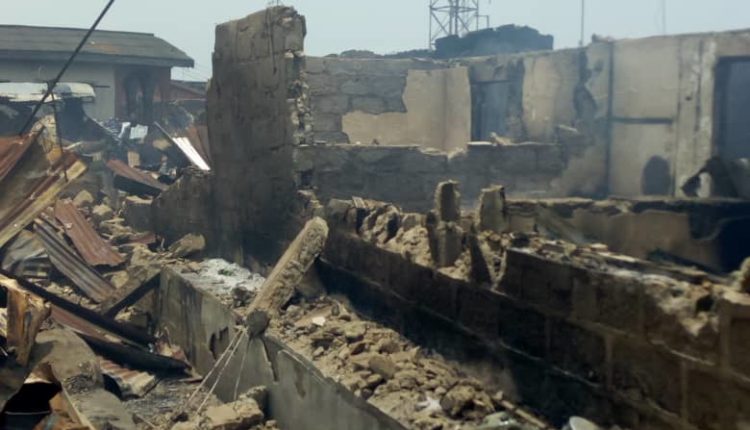 Share
By Monsurudeen Olowoopejo
Atleast 18 structures have been razed and hundreds of occupants displaced during a face-off between residents of Ajah in Eti-Osa Local Government, Lagos State over a parcel of land in the community.
The 18 structures which include three bungalow buildings with 48 rooms of different sizes and 15 different structures were previously sited on 1,944 square meters of land before they were razed during the face-off between residents categorised under two factions, the Ajah-Ijebu and Ajah-Ilaje.
When our correspondent visited the scene, occupants of the razed buildings were displaced with many yet undecided of where to seek refuge after what was previously their home had been turned to shred during the face-off over ownership of the land.
Many of the occupants, who were said to have no other alternative apartment, were seen standing with lost hopes, looking at the location where their apartments were previously located before the face-off that led to the building been set ablaze and their property destroyed when the building was lit by the warring factions.
To prevent loss of property, an eyewitness told our correspondent that the occupants put calls through to Lagos State Fire Service who responded swiftly to the scene to ensure that the fire was put out in fewer minutes.
Efforts by fire service officials’ to put out the fire, however, were prevented by parties laying claims to the land by emptying sachet and bottled water contents, filled it with Petrol Motor Spirit (PMS) and threw it into the buildings already set ablaze.
Lamenting how fire service officials were prevented from putting out the fire, Acting Head of the fire service, Margret Adeseye narrated that after receiving the emergency called at 0447hrs on Saturday, officials at Lekki Phase 1 station led by one PFO, Adenuga was deployed
According to Adeseye, when the situation became tense, men of the State Fire Service were advised to withdraw from the scene by the leader of the police team, ACP Gbolahan for safety reasons.
“And the Gbolahan, who led his team from Area J, Ajah, restore law and order before the fire service officials were allowed to put out the fire,” she added.
After the fire was put out, the acting director disclosed that normalcy was yet to be restored as the rivalry dispute continues in the community.
Confirming the efforts of the Police to restore law and order, Public Relations Officer (PPRO), Bala Elkana, in a statement on Saturday evening, disclosed that 20 suspects have been arrested over the face-off that crippled peace and harmony in the community.

36 suspects under arrest after daylight robbery in Lagos