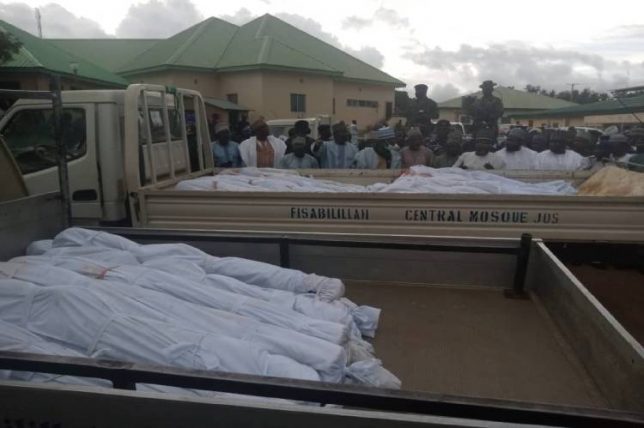 No fewer than 22 Muslims were reported to have been killed and 14 others suffering different degrees of injuries after their buses were attacked by irate youths in the Rukuba area of Jos, Plateau State.

The victims, who were in a convoy of five buses from Bauchi to the Ikare axis of Ondo State, where they had gone to attend an annual Islamic programme, Zikr prayer, were said to have been caught in the web of crisis that broke out in Jos after gunmen attacked some residents.

As gathered, the deceased and injured victims were returning from Bauchi on Saturday at about 09:00 am when they were attacked by the youths that allegedly mistaken them for the gunmen that were identified as Fulani herdsmen.

It was learnt that efforts by the travellers to pacify the angry youths, that had earlier blocked the road over recent attacks and killing of locals by suspected herder militiamen in Bassa local government area of the state, proved abortive.

Spokesperson of the Plateau Command, Gabriel Abuh, hinted that a distress call was received that a group of attackers along Rukuba Road of Jos North Local Government attacked a convoy of five buses with Muslim faithful who were coming back from the Annual Zikr prayer in Bauchi State and heading to Ikare in Ondo State.

The statement reads: “Upon receipt of the report, a team of Police personnel, the military and other sister agencies were immediately mobilised to the scene where Seven victims were rescued and six suspects arrested”.

The Commissioner of Police, Plateau State Command, CP Edward Egbuka, along with the GOC 3-Division, Major-Gen. Ibrahim Ali, also visited the scene and ordered for a discreet investigation to fish out other perpetrators of this barbaric act at large.

While disclosing that normalcy has returned to the area, Egbuka warned that those that perpetrated this dastardly act and others that incited it will be made to face the full wrath of the law.

The Command urged the public to remain calm and to furnish the Police with useful information that will aid the investigation.