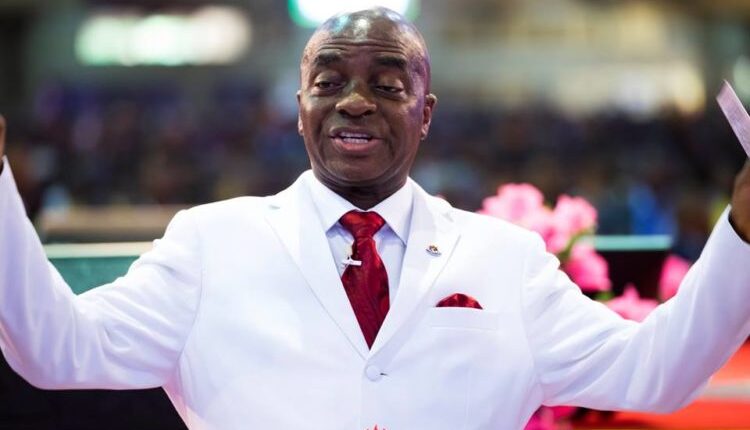 The Living Faith Church Worldwide popularly called Winners Chapel, has terminated the employment of at least 40 pastors over the alleged inability of the clerics to complete their task including expanding the membership base of the church they lead.

As gathered, some of the pastors were said to have assumed leadership of their former parish with about 1,000 members, and later the membership base begun to decline under their watch, with some church branches left with less than 500 members.

The Guild gathered that the development did not go down well with church leadership led by Pastor David Oyedepo, the General Overseer of Winners Chapel, and approved that they were relieved of their duties.

One of the affected pastors, Peter Godwin, who claimed that the leadership terminated his appointment for not generating enough money from members in his branch, disclosed that he was employed on the 28th of August, 2020.

Godwin, in a trending video, claimed that he was invited with about 40 of his colleagues by the head of pastors for the church in the state where he was deployed on July 1, 2021, and were all sacked over low income from their branches.

The cleric was deployed to Benue State for evangelism by the church leadership, a state that was, although, in the middle belt region, meanwhile was not a Muslim-dominated region of Nigeria.

He said, “Actually, by the special grace of God, our father in this great assembly, Living Faith Church received a mandate from the Lord to plant 10,000 churches in Nigeria and by the special grace of God, I was privileged to be one of the pastors that were employed on the 28th of August, 2020, that was last year.
“So after that, I started working, engaging myself in the work of the Lord. I tried my possible best to make sure I win souls for Christ but unfortunately, on the 1st of July, I received a call that the state pastor wants to see me, so I thought I was the only one. I was surprised, so I went to his office.
“When I got there, I saw other pastors too, over 40 of them, so I joined them. A few minutes later, we were issued a letter. I opened it and the content of the letter reads that I have been relieved of my duties. 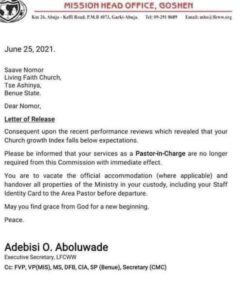 The letter signed by Adebisi Aboluwade, the executive secretary for the church, Adebisi Aboluwade, reads: “Consequent upon the recent performance review which revealed that your church growth index falls below expectation. Please be informed that your service as the pastor in charge is no longer required in this commission with immediate effect. You are to vacate your official accommodation and hand over all properties including the official ID card to the area pastor before departure”.

After reading the letter, he added: “I called the management the next day to know what happened since I wasn’t involved in any dubious activity or evil act. I was told by the management that the church doesn’t operate at a loss, they also told me the total income that is being generated from my station should be able to cater for my welfare and accommodation, so as a result of low income, I’m hereby dismissed”.
Efforts to get the Church to react proved abortive but a member of the Church, who did not want his name mentioned because he was not authorised to speak, stated that any pastor on the payroll of the church would continue to keep his job as long as he meets his task to the church.

He added that the performance index was not limited to clerics alone, adding anyone that who is earning his monthly salary from the church must be ready to meet the task that is attached to his office.

When our correspondent asked further that he mentioned his name, the member, who performs a key role in the religion house with thousands of members, stressed that no one would speak on the issue authoritatively

According to him, no one is authorised to speak on the issue at this time and you will have to wait until Daddy G.O (General Overseer) mount the pulpit and speak on it; until then, no one will utter any work on it.