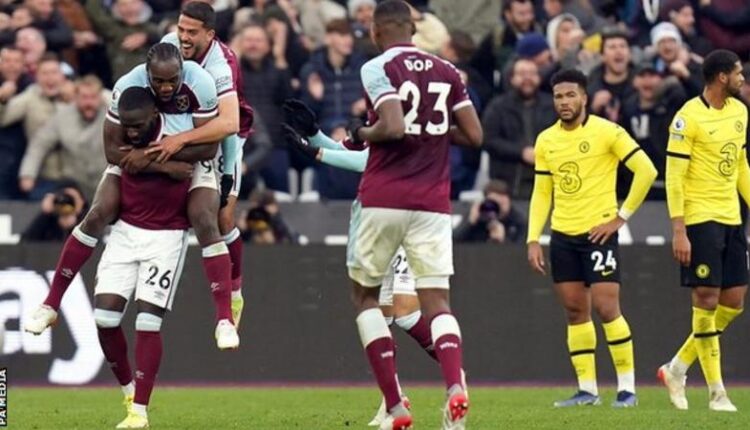 The Union of European Football Associations (UEFA) champions league defending champion, Chelsea, suffered their first away defeat of the English premier league after losing 3-2 away to West Ham United, another London city rival.

This defeat has forced Chelsea to lose their leadership position after their closest rival, Liverpool earn a late win during their encounter with Watford.

Although Chelsea led major parts of the encounter but surrendered their lead to their opponent, allowing the host to score two goals in the second half of the game.

The Thomas Tuchel side had taken the lead after 28 minutes of the encounter after their Brazilian defender, Thiago Silva, scored, but 12 minutes later, they allowed their city rival to level scores through Manuel Lanzini in the 40th minute of the match.

The equaliser came when Mendy brought down Jarrod Bowen following a poor backpass from Jorginho, allowing Manuel Lanzini to stroke home from the penalty spot.

To ensure the Blues leave the stadium victories, Mason Mount, ensured Chelsea regained their advantage in spectacular fashion, after sending a superb side-footed volley into the corner from Hakim Ziyech’s low cross for his second goal in two games.

In the 56 minutes of the encounter, 24-year-old, Jarrod Bowen, through a low drive from the edge of the area restored parity once more before Arthur Masuaku, in the 87th minute of the game scored a remarkable late winner.

After collecting the ball wide on the left with three minutes remaining, Masuaku’s attempted delivery took Chelsea goal-stopper, Edouard Mendy, by surprise and flew in at the near post to spark jubilant scenes among Hammers supporters.

Speaking on the goal, Masuaku said that he was as surprised as everyone else when his misdirected late cross beat Mendy to earn West Ham victory over the Premier League leaders in a pulsating encounter at London Stadium.

“I said to him I thought it was a great cross,” West Ham manager, David Moyes, joked of the defender’s first Premier League goal.

“It was very fortunate but in football, you need a bit of fortune sometimes. In the last few games we have lost it a little bit, but today we got it back.”

“This is a goal that OK, happens,” said Blues boss Thomas Tuchel. “There are no mistakes, just a freak goal – the problem is that it is the winner.

“Overall we did too many individual mistakes. If you do this for three consecutive games you cannot expect always to get a result.

“The schedule we play and effort we play, sometimes you feel tired, but you just need to accept it and control our risk management.

“We hate to lose and we have to digest it now. It is not a performance to be mad about, but in detail, we need to be better again.

“If we won the game nobody would have given us the title and if we lose it I don’t think anybody else gets it this weekend.”