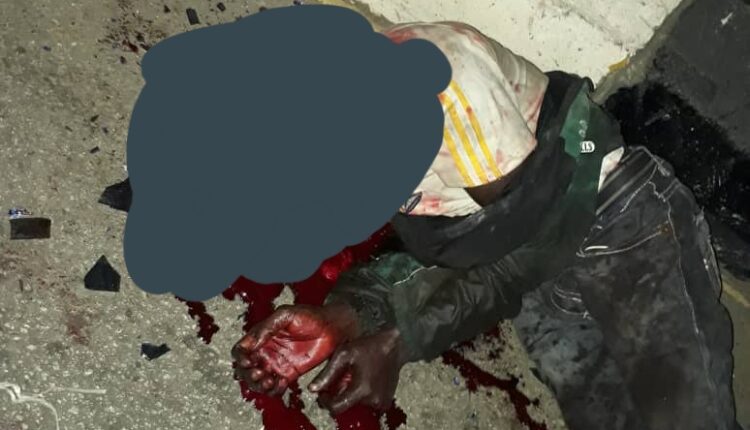 Occupants of 12 Osho street of Ikeja axis of Lagos may end up spending their Christmas in sober mode after a young man, identified as Adamu Bukar, was stabbed to death while in deep sleep yesterday night by his town man claimed to may have been under influence of hard drug.

Although the killer of Bukar was confirmed to have also accidentally met his death too after carrying out the act and was trying to escape, and that his dead body was found before Opebi linked Bridge.

Just as Bukar’s lifeless body was found in a pool of blood, his killer remains too suffer the same condition, leaving occupants of the building where the incident had happened in a state of confusion on what could have gone wrong.

How the two young men died mysteriously was still a surprise to community members, particularly occupants of the building, neighbours, and passersby as against usual preparations for Christmas celebrations which is a few days away.

As gathered, trouble started when one of the deceased allegedly jumped into the compound through the fence and went straight to where the other, identified as Bukar, was sleeping and stabbed him to death.

A neighbour, who confided in The Guild, said that he started hearing noise around 11:30 pm on Tuesday night but thought that it was normal argument until voices were becoming louder and had to run out to know what was happening. 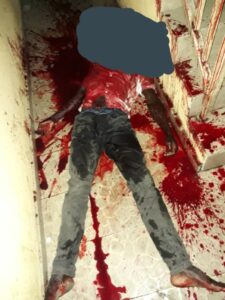 He disclosed that on getting to the building, he met Bukar’s lifeless body in pool of blood and that his killer had also met his death too while he was trying to run after committing the murder.

“His killer was known for doing hard drugs and other northerners guys putting up inside the building had rejected him staying with them because of the ways he always gets high whenever he had taken his drugs.

“I discovered that Bukar’s killer jumped the gate to gain access into the compound of the building because the gate is always on lock once it is 10 pm and went straight to where Bukar was sleeping and stabbed him to death,” the neighbor who does not want his name in print said.

One of the occupants of the building, who spoke to The Guild under anonymous condition, said that he was informed of the incident at about 12 am and that on reaching the scene, he met Bukar’s body inside a pool of blood.

He claimed that Bukar’s killer too has also met his death at the time he got to the scene and that he did not know how the murderer died.

“All occupants of this building were not able to sleep overnight because of what happen as Hausas and brothers of Bukar had gathered during the night, although we did not know what they wanted to do at that time.

“Today, as occupants of the building, we have been to Area F Divisional Police Station to report the incident and also, Bukar’s brother too was also invited to give an account of the incident,” he said.

Another occupant who expressed sadness over the situation and how the young man was killed, lamented that she and rest of the co-occupants never saw the trouble coming and that they were only preparing for Christmas with their families.

She said that the incident had tone down the spirit of Christmas in them and that some of them would not be able to sleep comfortably any longer since they have witnessed how Bukar was killed in sleep.

“It has been a sad moment since after the incident happened and our initial and usual ways of preparing for Christmas has been disrupted already. Our children cannot any longer sleep comfortably with a feeling of not getting attacking while in sleep just as it has happened to Bukar.

“Thanks to the RRS team who came to our rescue after hoodlums and Hausa people had gathered few minutes just after killings had occurred and we did not know their intentions as at that time,” she quipped.

Also confirming the incident, leader of Arewa youths in the axis, Baba Muhammed, said that both deceased are from the Borno and that Bukar’s killer was known for his waywardness, particularly hard drug usage.

He said that prior to the unfortunate incident, Bukar’s killer had been ejected from the building and warned not to visit the vicinity due to his unstable character after he must have taken hard drugs. 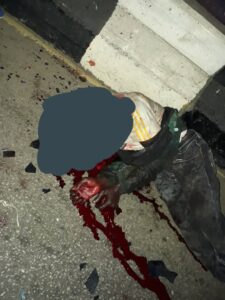 “Bukar’s killer, now deceased too, had been stopped by other northerners occupying the buildings because of his lifestyle. He is a drug addict who takes anything that comes his way and after taking the drugs, he will start misbehaving and he has been ejected and warned not to be coming into the compound because of his troubles.

“But yesterday, around 12 am, he found his way into the compound and saw Bukar where he was sleeping. Upon getting into the compound, he stabbed Bukar with a dagger and later hacked him with a cutlass like a chunk of meat and that was when people got wind of the happenings, and everyone who had slept woke up. We have reported the incident at the police station where everyone narrated their own side of the story,” Mohammed said.

Findings by The Guild revealed that calls were put to various police stations around but only that of Commander RRS, CSP Saheed Egbeyemi, yielded results after members of his team were deployed to the scene to calm tension.

Sources from RRS disclosed that when police arrived at the building they met heavy presence of hoodlums and Hausa guys who had already gathered to cause trouble in the area.

They said that they met body of the murderer on side of the road and that of Bukar’s inside the house and that from indication, the killer may have been mobbed while trying to escape after committing the crime.

However, efforts to reach the Lagos State Police Command’s Public Relations Officer, Muyiwa Odejobi, on the incident proved abortive as he was not available to comment on the matter.