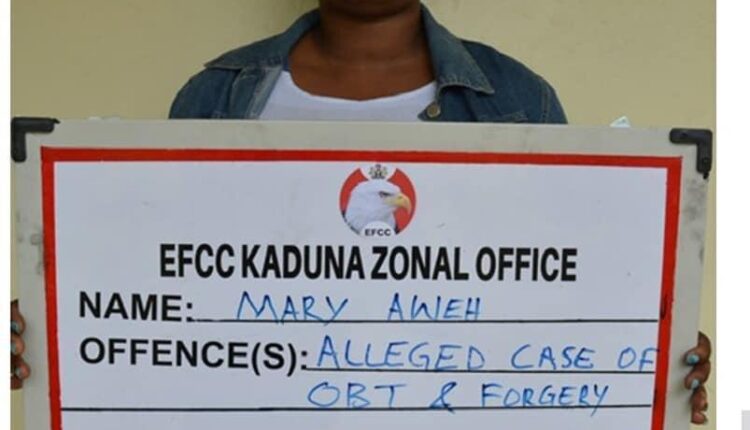 Olaleye, who was said to have been contracted by the two applicants, Tochukwu Asika and Daniel Alabi, who planned to relocate abroad, allegedly handed over the intending travelers’ fake visas and other traveling documents that were detected to be illegal by Kenyan Immigration officials.

After the act, the suspect was said to have left Kaduna for the Federal Capital Territory (FCT) Abuja to avoid been seen by the victims whom she allegedly swindled under a pretext of securing visas to Canada for them.

The suspect was reported to have been trailed by the EFCC and brought back to Kaduna by personnel attached to the anti-graft agency’s Zonal Office in the state for investigation.

Confirming his arrest, the Head Media and publicity for EFCC, Wilson Uwujaren, disclosed that Olaleye’s arrest was based on a petition by the complainants, who alleged that sometime in 2018, they contacted the suspect to arrange a trip to Turk and Caicos Island for them and that they paid her N1 million each, totaling N2 million to the suspect.

Uwujaren added that two days before departure, the suspect informed the complainants that the trip had been put on hold and offered them an alternative instead, that is, Canadian Visa; which they accepted.

He noted that the suspect directed both applicants to pay a cumulative sum that was over N4 million respectively for the visa, including consultancy fee and air tickets.

“But, after a long delay, the suspect called and issued them the Canadian visa and Yellow Fever cards, informing them that they would be traveling through Kenya.

“However, upon arrival in Kenya, the complainants were arrested by Kenyan Immigration Officials for possession of fake yellow fever cards, and subsequently detained,” Uwujaren added.

The EFCC spokesman, in a statement issued yesterday, said that the victims were later released by the Kenyan authorities and issued with new yellow fever cards, after which they made several unsuccessful efforts to contact the suspect to get her Kenyan representative to assist them with the connecting flight to Canada.

“However, the complainants were later re-arrested by the Kenyan Immigration and deported to Nigeria. “Upon arrival in Nigeria, the victims continued to make efforts to reach the suspect to retrieve their money, but their efforts proved abortive, hence the recourse to EFCC,” he stated.

Uwujaren said that the suspect was invited severally by the Kaduna office of the EFCC, but she shunned the invitations necessitating the anti-graft agency to place a ‘lien’ on her bank account.

“She was subsequently arrested at her bank in Abuja and brought back to Kaduna for further investigation and prosecution in court, as soon as investigations were concluded,” he said.