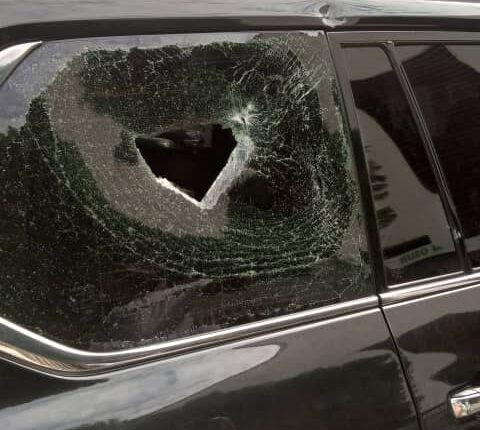 The ongoing EndSARS protest in Osun State may likely to have taken a twist after an unidentified group of hoodlums attacked state Governor, Adegboyega Oyetola, and his aides who visited one of the EndSARS protest venue to pacify youths who have been agitating for an end to police brutality in the state.

It was learnt that the peaceful demonstration was disrupted by the hoodlums that launched an attempted assassination attack on the governor and his team who were at the venue to express the state position against police excesses and abusive conducts often witnessed by innocent youths in Osun.

As gathered, the hoodlums were said to have launched an attack on the governor after his arrival at venue of EndSARS protest where he was expected to inform protesters of the state government plans to end police brutality within the state capital and its environs.

The governor, who engaged in a solidarity walk with the protesters to Olaiya junction, was said to have been hurriedly moved away from the scene by his aides after the attackers further attacked his convoy and vandalised vehicles.

Although, findings by The Guild revealed that the atmosphere became more tensed on Saturday after the governor left the scene, and the hoodlums further launched attacks on youths that had converged to listen to Oyetola’s plans for citizens protection and allegedly killed about two persons.

The thugs, who were armed with cutlasses and other weapons, were said to have taken over the scene and forced the protesters to run in different directions in the search for a safe zone.

A resident of the community, Kolawole Orebiyi, narrated that the hoodlums disrupted the exercise and halted commercial activities within the axis, as residents became scared that they could be attacked by the cutlass-wielding hoodlums.

Orebiyi stated that the hoodlums were not members of the EndSARS protesters that had since the start of the week embark on a peaceful procession for police reform in the country.

He said: “We were happy that the governor will be addressing us. But this joy was cut short by some hoodlums that disrupted the gathering and chased everyone away from the scene, to ensure none of the demonstrators continue with the protest”.

Another resident, Olabisi Usman, stated that after the governors left, the hoodlums vented their hanger-on residents and anyone that raised objection to their unruly conduct in the community.

Usman added that about two persons in the community were killed by the unidentified hoodlums after attack on the governor and his aides failed to yield the desired results.

The aide, who did not want his name mentioned considering that he was not authorised to speak, claimed that they were not normal EndSARS protesters that were noticed to have been conducting themselves in a peaceful manner same way it was in other states in the country.

Another aide, who decided to speak after several minutes of persuasion, indicated that the incident was a clear attempt assassination on Oyetola’s life and that it took security team tactical moves to protect both Governor and his entire aides.

Confirming the attack, Senior Special Adviser to the governor on media, Mabel Aderonke, said that the peaceful exercise was hijacked by hoodlums that attacked the governor and vandalised vehicles in his convoy.