Members and strong stakeholders within Lagos chapter of All Progressive Congress (APC) have said that Speaker of House of Representatives, Femi Gbajabiamila, and other leaders across local governments and councils in Lagos State were to be blamed for ugly events that played out during yesterday’s council chairmanship primary elections held in the state.

They said that these leaders were cause of trouble that led to attack and intimidations of members by thugs and cultists, disruption of what they said was supposed to be a peaceful primaries process, and hiring and registering of machineries and fake party members in order to manipulate outcome of the election results in favour of their leaders’ anointed candidate.

From Agege, to Surulere, Somolu, Ikosi, Mushin, Badagry among other local government areas and councils where violence were recorded, party faithfuls claimed that their lives were put in danger after their areas came under hired cultists and thugs ceaseless and sporadic shootings aimed at killing any members of Lagos chapter APC making attempt to dare the leaders’ positions.

In Agege, eyewitnesses who were APC, Lagos chapter, members confirmed to have experience intimidations and harassments from thugs hired to disrupt venues approved by the party for council primary elections and that, Orile Agege, two people we try injured by the thugs.

Similarly in Somolu, party faithfuls were said to have been held ransom by incumbent chairman, Abdulhamed Salawu, who they claimed declared that no primaries would be held in the area and for reasons best known to him alone.

In Surulere, the situation was not different with stakeholders accusing Gbajabiamila of being the brain behind series of troubles, thuggery, and indiscriminate shooting that took over the area even before the primary election process commencement.

They alleged that their crime against the speaker was as a result of their opposition to his anointed aspirant against their own choice of Youth Organizing Secretary, APC, Lagos chapter, Idris Aregbe, who they believe was more competent compare to that of the person Gbajabiamila wanted to enforce on them.

Lifeless bodies of two Unidentified young men on Haastrup Street off Ayilara Ojuelegba Surulere, were confirmed by residents of the area as remains of people that were killed by thugs who stormed the axis of Surulere in their hundreds to attack any gathering of members of APC assemble to vote during the party’s ongoing council primary elections. 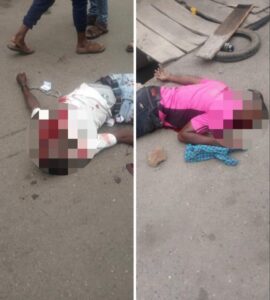 They said that the two young men were killed in the area while they were trying to vote for their preferred aspirants before they met their deaths at hands of thugs who attacked them and cut short their lives.

The members claimed that thugs have been terrorizing areas within Surulere and that their target were people and APC members that go against their principal wish and that people have to run for their dear lives.

An eyewitness who a resident in the area told The Guild of how the entire Surulere has been facing series of threats, harassments, and indiscriminate shooting from thugs and that the only thing that haven’t been done by hoodlums were to rob and rape women in broad daylight.

She disclosed that one of APC top leaders should be held accountable for the death of the two young men who had done nothing wrong but only came out to vote for their aspirants before meeting their deaths unprepared.

Another who also spoke to The Guild under anonymous condition due to sensibility of the issue said that the thugs were in possession of various weapons and that vehicles were vandalized by hoodlums.

Also, a woman leader from Ward G2, Jamila Mu’azu-Olukosi, narrated that the atmosphere at her ward was tensed and that she and dozens of members were forced to leave in other to avoid sustaining gunshot injuries during the exercise.

Mu’azu-Olukosi added that the exercise was peaceful in her ward before the cultists and hoodlums allegedly working for House of Representatives Speaker, Femi Gbajabiamila, stormed the premises and disrupted the voting process at the ward, forcing many to abandon their plans to scamper for safety.

According to her, as far as I’m concerned, no primaries election held in Lagos on Saturday because party leaders across local governments and councils foisted their candidates on the people and where there is opposition to their choice, thugs are sent to visit violence on members across Lagos, including Surulere where two people lost their lives.

“More saddening is the fact that the exercise was that of local government and councils across the state. If we cannot peacefully conduct primaries, an exercise that should be a party affair in state with no active opposition, then what message are we passing to the people who are skeptical about politics and the entire country about our party?

“It is disturbing that while our faction who are behind Idris Aregbe want a peaceful election, other Gbajabiamila-backed faction just want violence and that is what transpired yesterday. We were at the ward to cast our vote for our candidate, preferably, Idris Aregbe, and suddenly, these dozens of thugs arrived and demanded that we all leave. And when we resisted, they started shooting in the air, not minding that people could sustain injuries from their actions.

“Realising the extent of gunshots with deafening sounds that enveloped the atmosphere, I had to leave to avoid sustaining gunshot injuries at the premises,” she said.

She, however, called on APC National Leader, Bola Tinubu, Governors Advisory Council (GAC) members, and other leaders across the state to wade into the crisis and ensure normalcy return to the state such that people would be allowed to elect their choice candidate into the position.

However, APC major frontline aspirant in Surulere, Aregbe appealed to the speaker to allow a free and fair electoral process, saying we are not here to fight but to have a rancour-free exercise that would be in accordance with democratic norms.

Also in Shomolu Local Government, election was suspended after it became obvious that security of lives and property cannot be guaranteed in the area. As gathered, the atmosphere was tensed as the major contenders in the council were incumbents Chairman and Vice-chairman in the local government.

An APC leader in Shomolu local government, Gbenga Abdulai, noted that all efforts to ensure the election hold were thwarted by thugs loyal to both chairman and vice-chairman camps and that in averting a crisis, stakeholders in the area agreed to suspend the election.

The story was also the same in Epe Local Government with APC members said to have jettisoned the voting venues for fear of attacks from hoodlums after leading candidates and party leaders in the council promised to unleash violence if their wish does not come to pass.

“The incumbent chairman, Teliat Onilude, Chief of Staff, Lateef Yahaya, led a group of Cultist to collation center in Badagry where the Returning officer was placed under duress and asked to declare the incumbent chairman as the winner of just concluded chairmanship primary,” a source told our correspondent.

The source further hinted that voting did not take place in all the 10 wards in Badagry, adding that there were disruptions and harassment over the wrong voters’ register.

However, the lawmaker representing Badagry in House of Representatives, Babatunde Hunpe, said that the arrangements were alright until some people started disturbing the process in some centers because the process was not in their favor. “With the situation of things in Badagry Local Government, it is now left for the state executive of the party to decide on the next steps,” he said.

In Agege, it was gathered that wrong accreditation sheets were brought and the electorate could not find their numbers and names on the voters’ register.

“There was no primary election in Agege; actually people came out early in the morning to cast their votes but were later scattered by some sponsored hoodlums. The activities of the hoodlums affected all the seven wards across the local government area,’’ an APC chairmanship aspirant in Agege, Sola Osolana, said.

Osolana said that the hoodlums touched all the wards in the council from A-G to ensure the election did not hold or was canceled. “We appeal to the party leadership to shift the primaries to the state secretariat of the APC, Acme in Lagos. It is very clear that some people want genuine change but few want to disrupt the change thereby manipulating the progress of the party,” he said.

Also, the incumbent Vice Chairman, Agege Local Government, who is also an aspirant, Prince Abiodun Ogunji, decried the activities of the hoodlums during the primary election. “There was no election in Agege. We want the election to be rescheduled with thorough supervision from the leaders,’’ he said.

With the development across Lagos, hundreds of aggrieved APC members on Saturday kept vigil at the party’s state secretariat in Lagos to make their grievances known on the alleged lack of fairness in the exercise. To forestall possible breakdown of law, armed security operatives mounted heavy presence at the secretariat and barricaded access roads leading into the premises of the party secretariat.