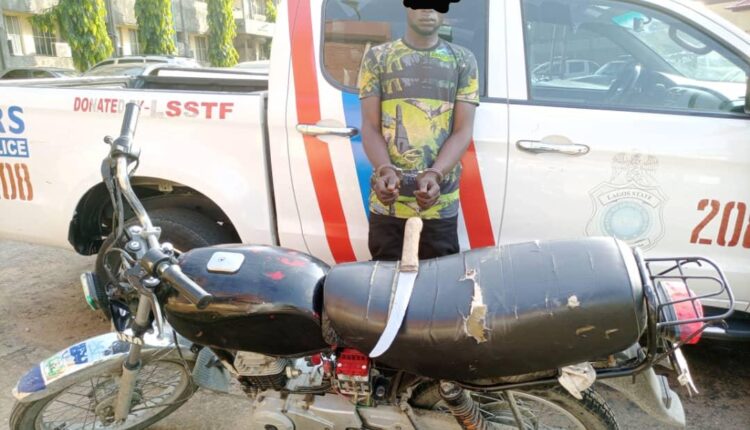 The Nigerian Police, Lagos Command has arrested and detained a 22-year-old traffic robber, Yakubu Hammar, after dispossessing a commercial motorcyclist popularly called Okada rider, of his bike in Lekki axis of the state.

As gathered, the suspect, who was said to have relocated to Lagos a month ago, was chased and arrested by the law enforcement agency through its Rapid response Squad (RRS), with the assistance of six motorcyclists on Lekki-Epe expressway.

The arrest of Hammar by the law enforcement agency personnel came four days after recovering a pump-action gun and a locally made pistol from the axis.

An eyewitness told The Guild that Yakubu, during interrogation after his arrest yesterday, explained that he boarded the bike from General Paint area to Chevron Bus Stop for N700 with a plan to dispossess the rider of his bike around the second toll gate.

Acting on his plan, he stopped the rider around the second toll gate on the pretext that he was going to urinate and asked that the motorcyclist, Abubakar Nosiru, wait for him.

On his return, rather than board the bike to continue the journey, he used a white handkerchief to gag the rider, pushed him away, mount it and speed off from the scene.

After realising that his motorcycle may not return to him, the rider screamed for help which attracted the RRS team on patrol and six of his colleagues that gave Hammar a hot chase and arrested him.

It was learnt that the suspect could not ride the motorcycle further after the throttle cable cut off a few meters before the popular Chisco Bus Stop on Lekki-Epe expressway.

Sources close to the RRS headquarters in Secretariat, Alausa told our correspondent that the suspect would be charged to court on the directives of the Commissioner of Police, Hakeem Odumosu.

Earlier, the sources added that RRS Commander, CSP Yinka Egbeyemi, while encouraging the team apprehended the robber, charged them to intensify the ongoing onslaught on criminals across the entire Lagos State as directed by Odumosu.

Egbeyemi added: “it is not yet time to rest on your oars. We have to outsmart the criminals and ensure that residents of Lagos remain safe always”.