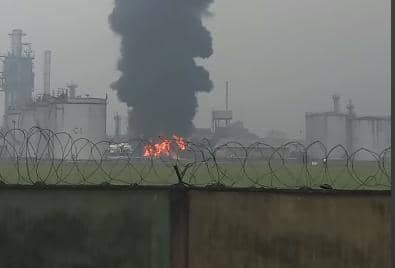 A prompt intervention of Port Harcourt Refining Company (PHRC) and officials of the Federal fire service has averted what could have been a major disaster that could have halted activities around the facility in Rivers State.

As gathered, the major fire disaster that was averted started after a spark occurred when a 33,000-litre truck was discharging naphtha, a flammable liquid hydrocarbon mixture, into a tank within the facility.

It was further learnt that management of the refinery led by the Managing Director, who was at the scene supervising the operation, immediately mobilised the safety mechanism of the refinery.

The safety officials were supported by Federal Fire Service personnel to successfully put out the fire that started during the early hours yesterday.

Explaining the role played by the officials, Group General Manager, Public Affairs Division of NNPC, Garba Muhammad, through a statement released on the incident, said that the fire was completely put out less than two hours.

Parts of the statement reads: “The management of the PHRC wishes to reassure Nigerians residing in the neighbourhood of the facility that they have no cause to worry about the incident and to also affirm that the safety of life and of property is at the top of its priority list.

“The incident affected only the discharging truck and the pump bay. No other property was damaged. The management and staff of the PHRC hereby extend its profound appreciation to all those that contributed towards bringing a speedy end to the incident; while wishing all Nigerians a very happy and fulfilling New Year 2022”.