How police arrest cleric with human parts in Cross River 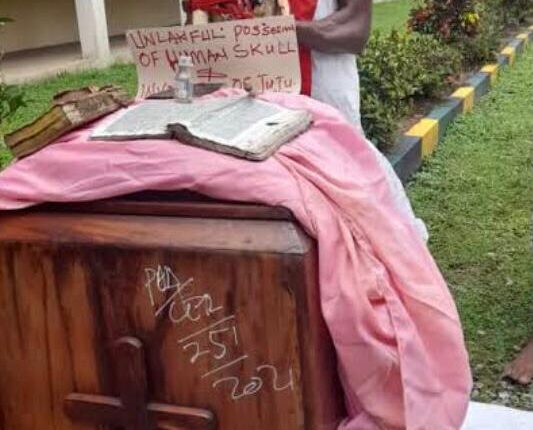 A 45-year-old cleric, Michael Bassey, has been placed under detention by Nigerian Police, Cross River Command for allegedly been in possession of human parts particularly skulls and pictures of his victims in the state.

Bassey, a pastor with United Evangelical Church, was nabbed by the law enforcement officers in the state with one human skull tied with pictures and a carved human image with red clothes.

The suspect, who resides on No. 56 Uwanse by Asuquo Ekpo Street in Calabar, the state capital, was apprehended by the law enforcement agency following complaints from a resident that alleged the cleric issued him a death threat.

Bassey was paraded on Tuesday alongside 25 other suspected criminals that were nabbed for various offenses including murder by the law enforcement agency across the state.

The pastor, during an interview with newsmen, explained that he was not a diabolical act, saying he was conducting healing services for the church congregation when the law enforcement officers arrived and whisked him to their headquarters.

He said: “I do not know who owns the human parts nor was I aware of how the police got the skull. I am innocent of the charges against me. I will appeal that they allow me to leave and continue my missionary activities”.

During the parade, the state’s Commissioner of Police, Sikiru Akande, said that the suspect would be arraigned in court after the command completes their investigations to ascertain others involve in the human parts trade.

Among the other 25 paraded at the Command headquarters in Calabar was a 34 years old man, Christian Edem-Eyo, who was alleged to have killed, beheaded, and buried the body of a 65 years old woman, Uduak Okpo, separately.

On his part, the murder suspect, Edem-Eyo, who showed no sign of being remorseful for his actions, told journalists during an interview session that he was led by the spirit to kill the 65-year-old woman.

“I killed Okpo because she belonged to the spiritual world particularly the marine world. And she had been terrorizing me spiritually in the compound and I believe the next action was to kill her,” he added.

The Commissioner hinted that the suspect, who was arrested yesterday, would be arraigned before a court accordingly after the completion of ongoing investigations.

The police boss, meanwhile, said that the Command’s “Operation Restore Peace” has recorded tremendous achievements through the arrest of criminals that had been terrorizing residents across the state.

Akande said that the command was already liaising with traditional rulers, youth groups, and other stakeholders on strategies that could further help to restore law and order across the state.