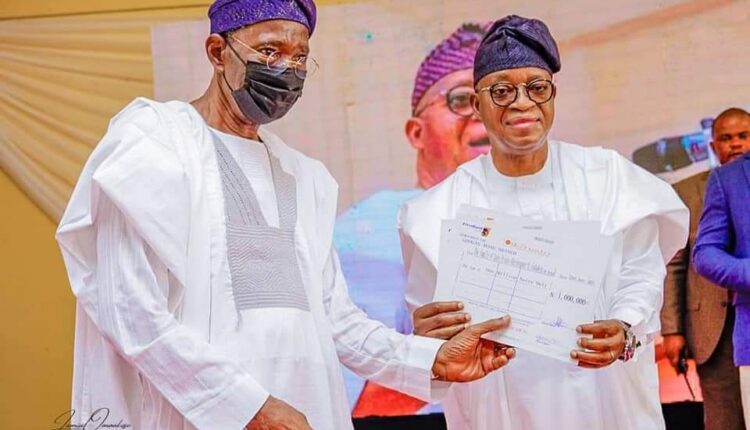 The Osun State Governor, Adegboyega Oyetola, has disclosed that his administration had spent about N35billion on payment of pensions and gratuities of retired workers in the state since 2018 in line with his government commitment to the state’s workforce welfare.

Oyetola hinted that his adminstration has consistently released N509 million on a monthly basis to cater for pensioners under the Old Pension Scheme, while not leaving out those on the Contributory Pension Scheme.

He also reaffirmed his administration’s commitment to continuously uplifting the standard of living of all categories of workers by taking their welfare as the topmost priority.

Speaking on Wednesday during the special lectures organised by the civil servants through the Office of the Head of Service to celebrate Osun 2021 Civil Service Week at the Staff Development Centre in Osogbo, Oyetola said that the government has recently released the sum of one billion, six hundred and forty-four million Naira (N1,644,000,000) for the payment of outstanding pension and gratuity of retired civil servants.

He said that the administration has been living up to its constitutional and fundamental responsibilities to guarantee the security of lives and property of the citizens and as well ensure the people’s welfare since the inception in 2018 in spite of the depressed economy.

The governor who described civil service and civil servants as the engine room of government, noted that the administration would not relent in its avowed commitment to continuously pay workers’ entitlements despite the harsh economic conditions arising from national economic challenges.

“As a government, we will not relent in prioritising the welfare of our active and retired workers in the state. We will continue to pay workers’ entitlements despite the harsh economic conditions arising from national economic challenges.

“We have consistently released N509 million on a monthly basis to cater for pensioners under the old pension scheme, while not leaving out those on the Contributory Pension Scheme. We have released the sum of one billion, six hundred and forty-four million Naira (N1,644,000,000) for the payment of outstanding pension and gratuities of retired civil servants.

“In all, from 2018 to date, we have so far spent about N35 billion to cater for all the categories of our pensioners. I would like to therefore urge our senior citizens to continue to show understanding and support our government in our effort to reposition Osun and stimulate its economy for prosperity and abundance,” he added.

Speaking on the lectures whose themes centred on tertiary education and innovating the civil Service in the state, Oyetola said it is heart-warming that the topics are direct invitation to re-tooling the civil service to comply with the demands of the knowledge- and technology-driven 21st Century for national and global competitiveness as well as optimum performance and efficient service delivery.

He noted that the themes of the lectures also reflected the dire need at the moment and what government must do to achieve the Osun of its forebears’ dream.

Oyetola lauded the workforce in the state for being supportive to the administration in its relentless efforts to build a virile and healthy economy capable of engendering socioeconomic development and prosperity for all and sundry.

The governor who urged the beneficiaries of the bonds to be prudent in spending their hard-earned money, said it behoves them to utilise the resources well by investing in productive ventures that would bring value to their families.

Earlier, the Head of Service, Dr. Festus Oyebade, thanked Oyetola for standing by the workers, active and retired to promote the dignity of labour.

He added: “Do you know that our Governor is great and greater too? On this occasion, we thank Mr. Adegboyega Oyetola for standing by the workers, active and retired, to promote dignity of labour. We are paid in full. Today, over a billion Naira bond will be given to deserving retirees. As we speak, we have captured contributory pension to August 2018. Do you know that additionally, today, 108 retirees who are junior and intermediate retirees placed for payment from August 2018 to 31st December, 2020 will receive their bonds, courtesy of Governor Oyetola?

“We are having security of tenure. And payments of our terminal benefits are made regularly. We now have Health Insurance Scheme for all the workers. As partners in progress, we demand for more on behalf of the workers and God will give you the needed enablement to do so,” he added.

In their separate remarks, the pioneer President, Nigeria Labour Congress, Comrade Hassan Sunmonu, and Pioneer Osun Secretary to the State Government/Head of Service, Chief Moses Inaolaji Aboaba, commended Governor Oyetola for not defaulting on the payment of salaries and pensions since assumption of office.

The duo also expressed gratitude to the State Government for sustaining the payment of full wages, salaries and pensions, saying the gesture has been a motivating factor not only to the civil servants who are the direct beneficiaries and the entire residents.