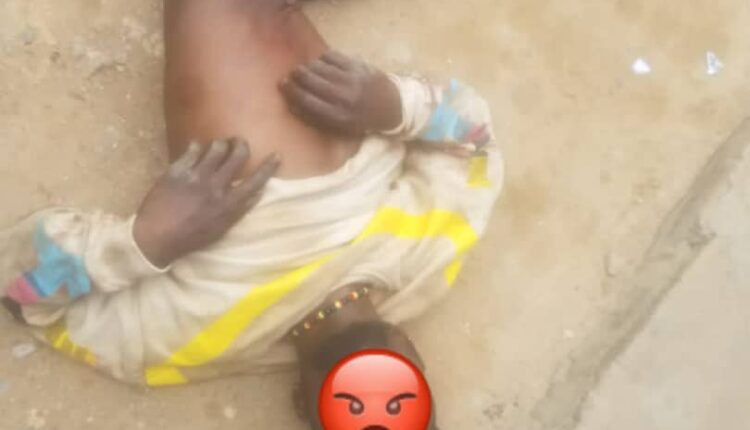 A young man identified as Stanley, a member of a two-man terror gang specialised in stealing Okada at night became helpless when he needed assistance from the public for a dying leader of his team known as Jboy, after he was stabbed by another group that accused the gang of stealing their motorbike and reselling it to them.

Jboy ran out of luck when no help came his way and his only partner in crime has to deal with his lifeless body and explained to passerby what happened to his team leader before giving up the ghost in the early hours on Thursday around Jonathan Coker axis of Ifako-Ijaiye Local Government Area, Lagos State.

For residents of Jonathan Coker, it was learnt, they became attracted to the young man, Stanley, after they saw him running to the axis with a lifeless body hanging on his shoulder with bloodstains all over him, searching

The residents became attracted to him and abandoned their chores as well as other activities and moved closer to him, although none provided the assistance Stanley seek for, leaving him to his fate.

As gathered, after no help came the way of Stanley and later discovered that Jboy had passed on, the young man dropped the lifeless body in the community, an action that further got residents more interested in the case and preventing him from allegedly absconding.

To ensure proper investigations, the residents were said to have informed the Nigerian Police, Lagos Command, seeking the law enforcement agency’s assistance to investigate the case.

On arrival of the Police, the timid member of the gang begun to narrate his ordeal to residents and passersby, in order to get their sympathy and possibly disassociate himself from the murder of his gang leader.

Residents narrated that the young man claimed to have been attacked alongside the deceased by a group of suspected hoodlums that discovered they had on them a substantial sum of money and demanded that they hand it over to them.

A resident, who identified himself as Solomon, said that the young man narrated that when they were attacked, his team leader, who was discovered by the hoodlums to be with the money, was the focus of thugs that waylaid them around Oko-Oba axis.

He noted that Stanley, in his narration, stated that he took Jboy away from the scene, after the hoodlums left, with the aim to get a hospital that could give him required medical care.

Meanwhile, to passersby and eyewitnesses, Stanley’s explanations and accounts of what transpired before arriving on Jonathan Coker street were not corroborating, but the helpless man kept on telling the same story of how his team leader met his untimely death.

Later, when our correspondent interviewed the young man before the policemen attached to Nigerian Police, New Oko-Oba Divisional Police station took him away, the troubled man confessed that truly he and his late team leader were a two-man terror gang that specialised in stealing motorbikes whenever they have the opportunity and that they were attacked by another group of bad guys who claimed to be owners of the bike that was sold back to them.

The hoodlums, according to him, demanded that the N140,000 which they paid for the motorbike be refunded, but he and Jboy turned down their demands since they were sure the item does not belong to anyone in the community.

Stanley narrated that, as the argument intensified, himself and the deceased ran for their life only for him to discover that his late crime partner had been stabbed and all his effort to get him help later proved abortive, as none came his way before giving up to a ghost.

The young man, who hailed from Ebonyi State, further claimed that his aim was to rush Jboy to hospital but luck ran against him because no medical facility was nearby and on sight.

The confused-looking young man told The Guild that before coming to sell the motorbike which they had kept for over two weeks, he and Jboy had been friends since childhood back in Ebonyi state before leaving for Lagos in search of greener pasture and only for his longtime friend to die in his hands this morning. 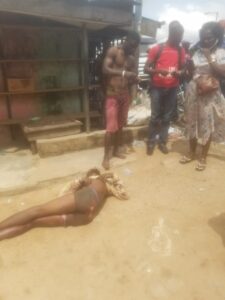 He also disclosed that the deceased gang leader, on arrival to Lagos, became a Bartender and that he was assisting his master to sell raw rice, in order to also learn the trade and possibly start the business.

According to him, we both left our various sources of livelihood and teamed up to operate as a two-man robbery gang, carting away property belonging to Lagosians at night whenever we have the opportunity to do so.

When the Guild contacted the Police Public Relation Officer (PPRO), Adekunle Ajisebutu, for comment on the case, the police spokesman stated that he was yet to be briefed by the Divisional Police Officer (DPO), assuring our correspondent that whenever he is briefed, a statement would be released.