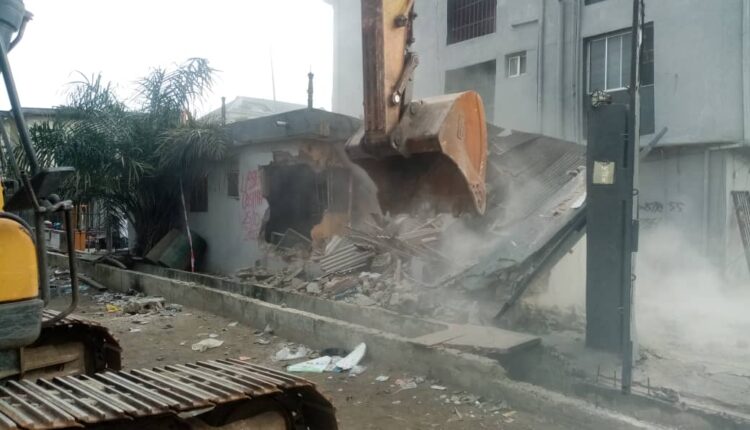 Occupants of a two-storey building in Surulere Local Government, Lagos State have narrowly escaped death when the structure suddenly partial collapse in the state.

After escaping death, the occupants were said to be currently stranded after the building site at 4, Kola John Street, Aguda axis of the council was finally pulled down by officials of the Lagos State Building Control Agency (LASBCA).

Aside from occupants of the distressed building, owners, and occupiers of adjourning buildings were also evacuated by the LASBCA officials to avoid loss of life during the demolition exercise.

Speaking on the building, General Manager of LASBCA, Arc. Gbolahan Oki, noted that the building was finally pulled down to prevent it from collapsing on others.

According to him, the 3 Floor Structure (and Pent Floor) was Distressed as it was observed that a section of the Parapet Wall/RC Slab of the Pent Floor Roof Gutter had collapsed partially with the Concrete/Sandcrete Blocks from the collapse damaging a major part of the Roof Coverings and Ceilings of the Bungalow Building beside it.
.
Oki further noted that from observation, it was discovered that the Parapet Wall above the 3rd Floor of the structure and Burglary surrounding the Parapet Wall were also affected by the collapse leaving the remains of the partial collapse still hanging.

He said that the occupants of the affected building and the adjoining one had to be quickly evacuated to prevent loss of lives due to the collapse.

Oki revealed that prior to the collapse, the owner had carried out illegal renovations, adding attachments to it without recourse to the Agency to monitor the process, hence the collapse.

While thanking God that no life was lost, the General Manager said that the Agency has already commenced the total removal of the structure as leaving it would be inimical to the safety of the residents in the area.

He appealed to owners and developers of existing buildings to appraise the stability of their buildings by conducting Non-destructive tests(NDT) at the Lagos State Material Testing Laboratory, which he says would reduce the incidences of building collapse.