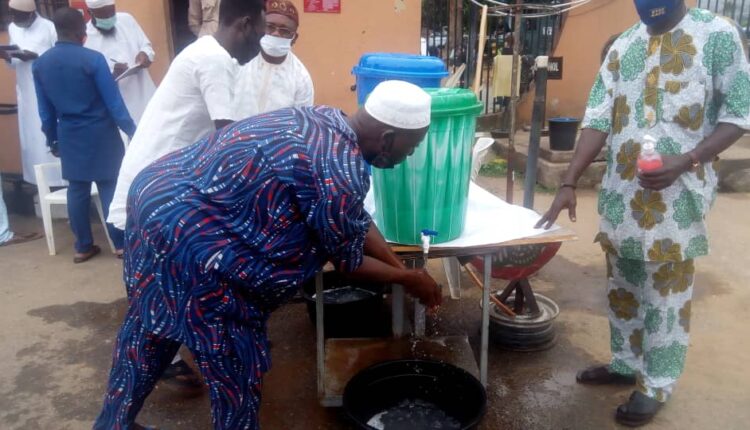 After four months of closure occasioned by outbreak of coronavirus, Mosques in Lagos State were reopened for Jumat service on Friday with thousands of worshippers trooping to different religious centers to perform their religious rites.

The worshippers, who could not hold back their joy that mosques were reopened for services, left their homes, businesses, and ofiices dressed in their best and ironed attires with face masks to indicate their compliance with government guidelines on COVID-19  for the mosques to engage in the rites considered very important.

At entrance of the religious centers, the worshippers, eager to observe the Friday worship after months absence, complied with government directives, queue at the entrance to aid their access into the mosques, release their bio-data, subject themselves to a thermometer check, washed their hands, obtain tally numbers and engaged in other activities as listed in the guidelines released by the state government.

On the streets and roads surrounding the mosque, the usual trading activities were barred, preventing vendors of Islamic wares opportunity to make brisk sales after the worship hours.

Reopening of the mosques came barely seven days after the state governor, Babajide Sanwo-Olu, approved that religious houses should commence on Friday for Muslims and Sunday worship services for Christians with strict guidelines that they must not exceed 50 percent of their capacity to further prevent spread of coronavirus.

The government also directed that worship service must not exceed between 1 and 2 hours and that the religious houses must be fumigated and shut within an hour after the service and that contacts of the worshipers obtained for COVID-19 tracing to curtail community transmission of the virus.

Lagos, with over 20 million population, remains the epicenter of the outbreak in Nigeria and currently has over 15,000 confirmed cases and has recorded 195 COVID-19 related deaths.

At the mosques, The Guild gathered that the worshippers, in order not to lose out from the prescribed capacity by the government, arrived early and carefully slot into the allocated portions in the mosques.

During a visits to some of the mosques across Lagos, some worshipers, meanwhile, were said to be disappointed when they were turned back by mosques management after attaining prescribed capacity.

At the Alausa Secretariat mosque, Ikeja, the level of compliance by worshippers to the government guidelines were without blemish with the cleric, Abdulhakeem Kosoko, lecture centered on the pandemic that forced the government to put religious houses under lock.

While urging the congregation to obey the guidelines including social distancing, he explained that the measures were introduced for the good of the populace and to prevent worshipers from contracting the virus during visits to the mosques.

Also, the Chairman of the Mosque Committee, Dr. Afolabi Abiodun, disclosed that the mosque, with a 5000 capacity was limited to 500 worshippers to avoid contravening the governor’s directives. 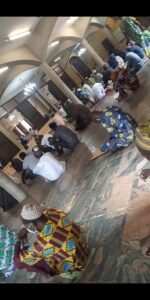 Abiodun, who could not hide his joy that the mosques have been approved for reopening, stated that all necessary measures were put in place to ensure worshipers adhere to guidelines set by the government.

He said: “This mosque is a 5000 capacity but we have limited it to 500 and this is to ensure that we abide by the government directives on COVID-19 and to prevent anyone from contracting the virus within our premises”.

Also at the Oshodi central mosque, worshippers were seen washing their hands before accessing the mosques, observed social distancing alongside with their face masks.

To assist worshippers from missing out on the opportunity, the mosque management organised the service in batches with strict adherence to social distance.

As gathered, religious services have been linked to mass outbreaks of the virus elsewhere in the world, including France and the United States where religious houses were opened and closed after the virus spiked.

Speaking on the mosque reopening, Commissioner for Home Affairs, Anofiu Elegushi, disclosed that different teams have been dispatched to across the state to ensure strict enforcement of the guidelines approved for religious houses in the state. 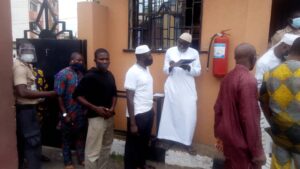 Elegushi assured worshippers that other religious services would be approved by the government as the cases subside in the state, saying, all we are doing is gradual reopening because we do not want to endanger the lives of our citizens”.

Just In: Real Madrid, Juventus bow out of 2020 champions league