How late Joda, others aided my presidential ambition – Buhari 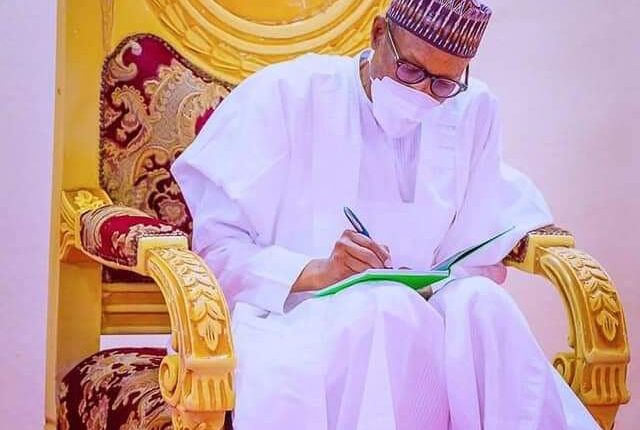 President Muhammadu Buhari has narrated how a late former Permanent Secretary, Ahmed Joda, and two other political bigwigs in the northern region supported his presidential ambition since he began vying for the oval office before his eventual victory during the 2015 presidential election.

He explained that Joda, with former Minister of Commerce and Industry during his military administration, Dr Mahmoud Tukur, and Minister of Animal Health and Northern Cameroons Affairs in the defunct Northern Region Government, Abdullahi Jada, all deceased, contributed immensely to journey to the presidential villa.

Commending Joda, who also served as Chairman of the transition committee that ushered in his administration in 2015, Buhari described his services to Nigeria as immeasurable, saying that all the years he knew the revered public administrator, he never requested any favours from him.

The president spoke on Friday at the palace of Lamido Adamawa, Muhammadu Musdafa, during a condolence visit to the families of three elder statesmen and prominent sons of Adamawa State who passed recently.

The president, who was accompanied by the Adamawa State’s Governor, Ahmadu Fintiri, recounted his personal relationships with the deceased, noting that at various points, they played very supportive roles in his public service.

On the late Joda, he said: ‘‘Since I became Governor of North East, under General Olusegun Obasanjo and later Minister, Ahmed Joda was part of those who assisted me, until his transition.

‘‘He was very supportive each time I called on him as governor, Minister and President and he never demanded any favours from me, either in cash or any form of gratification.’’

On the late Dr Mahmoud, the president said: ‘‘He was a bosom friend to my brother and they studied together in Europe. He also contributed much during my military administration and did well in his assignment.’’

Buhari noted that from the antecedents of his close working relationship with the people of Adamawa and how they have distinguished themselves, he appointed one of their sons the Minister of FCT, a very important position.

‘‘I gave an Adamawa indigene, Mohammed Bello, a huge and complicated assignment as FCT Minister. Although he is young, he is performing very well with the fear of God,’’ the President said.

Commiserating with the government, people and the Lamido of Adamawa on the demise of their illustrious sons, Buhari prayed for the repose of the souls of the departed and divine comfort for their families.

In his remarks, Fintiri thanked the president for the condolence visit, saying ‘‘given your closeness to the deceased we should have been the one travelling to Abuja to commiserate with you.’’

The governor commended the lresident for taking out time off his busy schedule to visit Adamawa, on the same day his son, Yusuf, was getting married to Zahra Bayero, the daughter of Nasiru Ado Bayero, the Emir of Bichi in Kano.

The Lamido Adamawa also conveyed the Emirate’s appreciation to Buhari and his entourage, pronouncing blessings for safe travels and success in the president’s engagement in Kano for his son’s wedding.