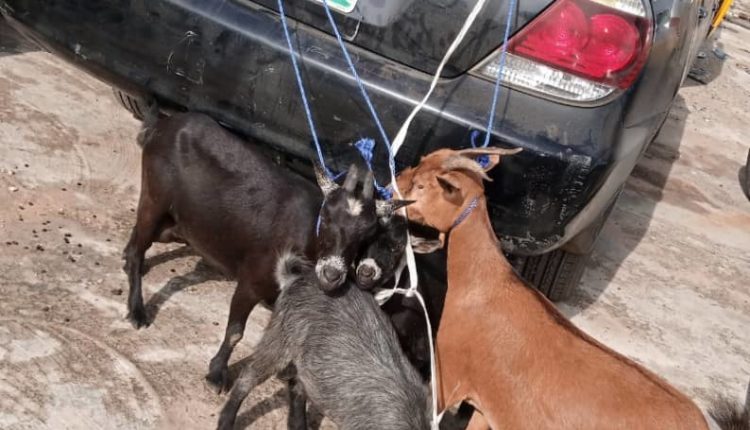 Should the goats be charged before Lagos state mobile court for wondering about, four of them may have to hire an interpreter to speak and plead for leniency on their behalf.

On how the goats found their way to police custody, the Lagos State Environmental and Special Offences (Enforcement) Unit (Taskforce) disclosed that its operatives recovered the four suspected stolen goats with covered mouths and other items inside an abandoned vehicle in the Ikorodu area of the state.

It explained that the driver and other occupants of the vehicle fled the scene and abandoned the vehicle, goats and other items to evade arrest after they contravened Lagos traffic law at Ikorodu on Wednesday.

Confirming the incident, the TaskForce Public Relation Officer, AdebayoTaofiq, said that the law enforcement agency’s team was on monitoring patrol around Ikorodu axis when they intercepted the vehicle, a blue Toyota Camry with the registration number AAA 743 EZ plying the Bus Rapid Transport (BRT) corridor, an action which contravenes the state traffic law and punishable in the state.

Taofiq, through a statement released to newsmen on Thursday, disclosed that body language of the vehicle occupants raised suspicion on part of the enforcement team lead by DSP Anthony Abutu, which led to a thorough search of the vehicles.

According to him, following the search, four goats with covered mouths and food items were recovered from the booth of the car, indicating that the goats and other items in the car were stolen.

Taofiq, however, enjoined residents in the Ikorodu area whose items or goats are missing to not hesitate in checking out the recovered items at the task force office.

“In this regard, the Agency has called on members of the public, particularly those residing around the Ikorodu axis whose goats are missing or suspected stolen to report the Agency at Bolade, Oshodi for collection of the recovered loot,” the statement read in part.

Meanwhile, Taofiq disclosed that the agency has received new sets of kits donated to all Nigeria Police Officers attached to task force from the state government.

He explained that the gesture was aimed at boosting the morale and commitment of the officers attached to the Agency, adding that the new kits include sets of uniforms (Camouflage and black), berets, shoulder badges, and crests.