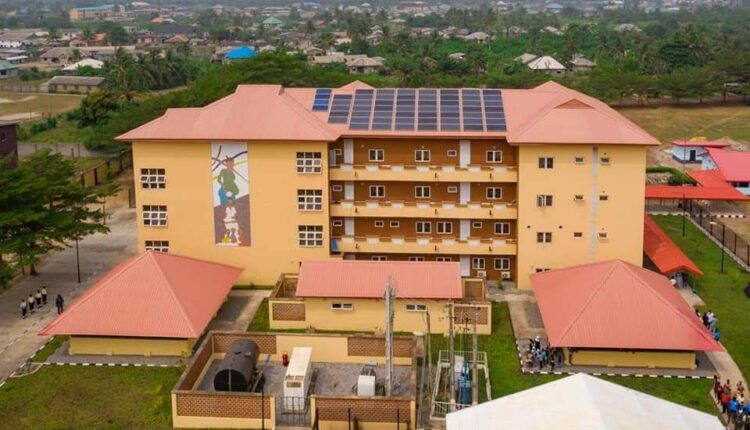 The Lagos State Governor, Babajide Sanwo-Olu, has commissioned a 110-bed Maternal and Childcare Centre (MCC), and School of Anaesthesiology housed in Badagry General Hospital, saying the projects, among others across the state are geared towards deepening quality healthcare access.

Aside from the healthcare facilities, the governor also commissioned 252 units of two bedroom housing project in Idale; and flagged off the construction of the 5.5 kilometre-long Hospital Road being rehabilitated to create easy access to the Badagry General Hospital and the new housing estate in the town.

The governor said that quality healthcare services had been prioritised in his administration’s development programmes to ensure a healthy state, saying without healthy citizens, it would be hard to achieve a thriving Lagos which had been praised for all developmental indices across the country.

He said that with the completion of the four-floor MCC, which was already being operated, his government had expanded healthcare infrastructure and improved access to quality health services in the town, and across the state.

He noted that the projects were part of his administration’s efforts to bring development in Badagry at par with other areas of the state.

“Today’s commissioning activities are in fulfillment of part of the promises we gave our citizens in Badagry and I am delighted to be inaugurating three key projects that will enhance standards of living and boost development of human capital, particularly the 110-bed MCC we have completed in this part of Lagos.

“This is just a testimony to our assurance to the people and our commitment to deliver quality projects that will turn around the lives of our citizens. Not only the MCC we are handing over for public use today has an emergency service, it also caters for obstetrics and gynecology. There are also laboratory, radiology, paediatrics and immunisation departments,” Sanwo-Olu said during the commissioning yesterday.

The governor said that the rehabilitation and expansion of the School of Anaesthesiology in the Badagry General Hospital were aimed at increasing the number of trained professionals in the field. He said such pivotal projects were being replicated in other locations across Lagos.

“The people of Badagry and the adjoining communities now have increased access to quality and safe healthcare, and reduction. This will bring about complete eradication of maternal and infant mortality, as well as general improvement in all maternal and child health indices in this local government. All these benefits will in turn have a positive ripple effect on the development and socio-economic indices of Badagry.”

The state’s Commissioner for Health, Prof. Akin Abayomi, said that the Badagry MCC was immediately activated for operation after its completion last November, disclosing that the facility had already delivered healthcare services to over 3,000 outpatients and 600 children. The facility, the Commissioner said, has taken 49 successful caesarean deliveries.

The MCC, Prof. Abayomi noted, would complement the capacity of the 21 primary healthcare facilities across the three Local Government Areas (LGAs) in Badagry axis.