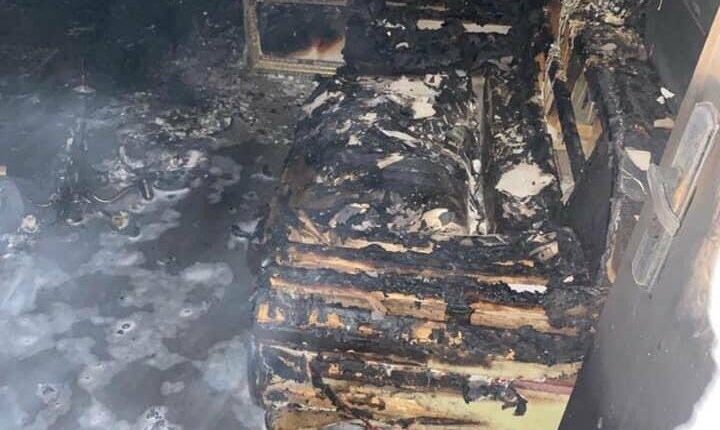 A property belonging to popular Yoruba activist, Sunday Adeyemo, known better as Sunday Igboho, was during the early hours of Tuesday set on fire by unidentified hoodlums.

As gathered, the hoodlums whose numbers were yet to ascertain stormed the property which was located in the Soka area of Oyo State, around 3 am and burnt some part of the building to ashes.

It was learnt that the arsonists who drove in a Hummer bus and Micra (taxi) shot in the air several times before torching down the building.

Confirming the report, the state police command spokesperson, Olugbenga Fadeyi, said that the police said that the activist’s mini sitting room was set on fire and other belongings were yet to be estimated.

He noted that the command had commenced an investigation into the incident as part of its commitment to unravel those behind the arson and bring them to justice.

Through a statement released to newsmen on Tuesday, Fadeyi said the state’s commissioner of police had given a marching order to all officers to intensify patrol operations as part of measures to achieve a well-secured state.

“At about 0620 hrs of today 26/01/2021, a report was received at the Sanyo Police Station that some unidentified hoodlums came to Sunday Igboho’s house at Soka area of Ibadan in a Hummer bus and Micra (taxi) firing sporadically, and set the house ablaze.

“The mini sitting room got burnt in the process while the value of other properties is yet to be estimated. Immediately the DPO Sanyo got a wind of the incident, he contacted fire service while he also went to the scene for an on-spot assessment.

“The fire was eventually put out. An investigation has commenced into the incident while the Police are on the trail of the hoodlums.”

Narrating his side of the story, the activist said that he was informed that bandits had attacked his building and upon arriving at the place, they had escaped.

Briefing journalist on Tuesday, Igboho said that his property destroyed by the arsonists who fired gunshots before breaking in would not be less than N50 million.

Furthermore, he alleged that the attackers have some Yoruba people who gave them useful information about his property and how they can break into it.

According to him, what I find surprising is that some Yorubas are in support of the herdsmen to set my house on fire. I’m saddened by it.

“Around 3.30 am today, my younger ones residing at my old house rushed to my gate to wake me up, saying some bandits came to the house, fired gunshots, broke the gate, and set the house ablaze. The two people at the house managed to escape. By the time I got there, the bandits had escaped. So, we called firefighters to help us put out the fire.

“When they knew they could fight, fire gunshots, and set a house ablaze, isn’t it where I stay that they are supposed to come? If they had come to the house where I stay, I would have had evidence for you people (journalists) because they won’t all escape. It’s either you meet their dead bodies or meet them with broken legs. I thank God that they applied wisdom by going to a house where they know that I don’t live and destroyed my properties and burnt it down,” he said.