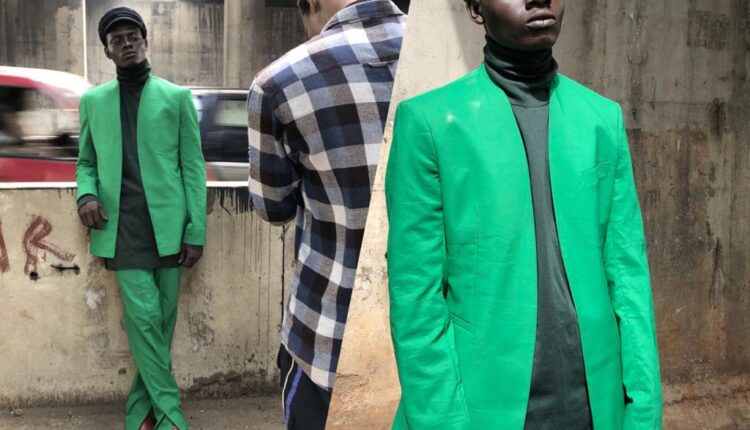 Fortune, just as it has the way of finding its own, this time, may have located an homeless young man, identified as Ali, who by chance came in contact with a popular fashion designer, Afolabi Lagos, that has decided to tutor him on how to become a model.

Like many youths, Ali, had dreams and planned to achieve them but fate had placed him under the bridge where he had been taking refuge during the day and night particularly when it rains.

And daily, the young homeless man sleeps and wakes up under the bridge with hopes that fortunes would smile on him someday and bring his dreams as well as aspirations to fruition in Lagos, Nigeria’s commercial city.

And yesterday, Ali’s psyche caught the attention of Afolabi Lagos who saw the potentials in him and decided to clothe him and placed him before the camera to showcase the homeless young man to the public.

The creative Afolabi, who took to his official social media handle and explained how he met with the homeless man, revealed that while waiting for his model to arrive for an agreed photo shoot, he then sighted the homeless man, sleeping under the bridge in Ikeja, Lagos State, without any premonition that he had the characteristics of a model we were searching for.

Afolabi, in the post, said his team decided to approach Ali to model an outfit as the professional model that was hired for the shoot had refused to show up and the time allotted for the exercise was running late.

The fashion expert added that the dark in complexion gentleman agreed to model for them and what appeared on the camera screen was beyond their imagination, saying, this was the reason he could not keep the story to himself.

To convince members of the public that his story was true, Afolabi accompanied his messages with stunning pictures of behind the scene activities and in the pictures shared, the young man was seen posing effortlessly for the camera to capture his style.

The designer, who was elated with the production, described Ali as a model that was waiting to be discovered under the bridge in Lagos.

Expressing his joy on the photoshoot outcome, Afolabi added that Ali exceeded the style team’s expectations with his body structure, postures as well as skin tone.

Ali who is possible to become a famous model wowed many Nigerians that have seen the pictures posted by the designer on his official social media handles.

“I had a shoot today at Ikeja, while we’re waiting for the model to arrive, we decided to meet with a guy (ALI) who was sleeping under the bridge to model for us. I would like to believe that Ali was born for this. His pose, his body structure, and his skin tone were perfect,” Afolabi wrote.