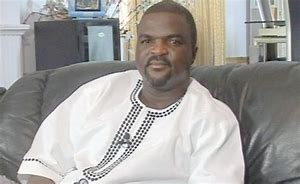 Controversial fuji singer-songwriter, Abass Akande Obesere, has made a stunning comeback into the music scene, riding on back of one of his major hit songs, “Egungun”, which he had recorded over 19 years ago.

The energetic performer started his career under Sony Music Label in 1981, prior to which he had tried his hands at several occupations including boxing, printing and store keeping before he became a musician and gained renown for his special brand of music.

Omo Rapala, as he is fondly called by fans, quickly achieved notoriety due to the vulgar nature of his song lyrics and the open manner with which he discussed taboo topics through his composures, and garnered a cult-like following of fans who were appreciative of his choice  of art form.

Through his decades long career, Obesere has released major hit albums, thrilling his fans with catchy dance tunes, however his major hits came after he left Sony Entertainment to join Bayowa Films and Records International in the early 2000’s, under the aegis of which he released six albums of which three, Egungun Be Careful, Old Skool Lapel and Apple Juice, shot him to stardom and planted him surely amongst great Nigerian musicians of his time.

Passing decades had, however not been too kind to the fuji star as his musical offerings which included tracks such as Ebelesua, Paraga, Alhaji, Alubarika, Ojurawonlo, Skoro, amongst many others had not received as much acclaim as during his earlier years, a predicament which had led to taunts and lyrical jabs from rival fuji musicians.

The tides, however, seem to have turned as a sudden resurface of his wildly popular “Egungun be careful” song once again catapulted Obesere back to limelight with the help of the internet, placing him far beyond his two decade old stardom, and bringing an artiste who had become a has-been, back into relevance within the Nigerian music and entertainment industry.

Egungun had made an unlikely comeback following the Lagos State Government’s decision to restrict operations of commercial motorcycles and tricycles in 15 Local Governments and Local Government Development Areas of the state, as well as along all major highways and bridges in the state, incidence of which caused a viral trend of opinions both for and against the government decision.

In an uncanny play of fate, the restriction implementation which had viral trends online helped push “Egungun” to the forefront and saw it go from a song which had been hit 20 years ago, to renewed relevance, renewed appeal and acceptability, as well as a massive growth of Obesere fan base around the world.

As a result of Egugun’s successful relaunch of Omo Rapala’s career, throngs of  youths became the Obesere-brand fans, to the joy and excitement of the 55 year old musician who expressed his belief that things had played out according to God’s will, and that it was his appointed time to make a come-back.

Since the viral reawakening, Egungun has opened new doors to Obesere and the fuji song star has had several remixes of “Egungun be careful” released, one in which he was featured by Bolanle-crooner, Zlatan, and the other by popular hiphop artiste, Skibii, as well  as an RnB cover of the song by Teni.

According to the fuji-icon, “You know it was the restriction of motorbikes and tricycles by the Lagos State government that led to the resurgence of the song. The song was basically used to tell motorcyclists to be careful on the expressway,”

“God’s time is the best and I believe this is His chosen time for me. I am ready to sing with up-and-coming artistes because I know that we can benefit from one another. Even if I have to make the remix of Egungun Be Careful more than 20 times, there is nothing wrong with that because people are enjoying it”.