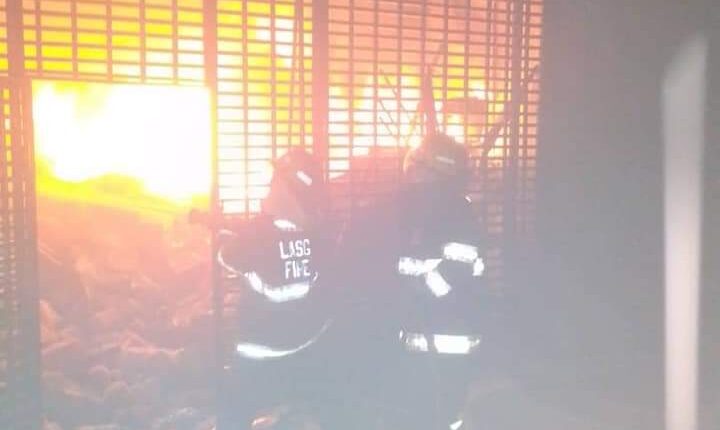 Property worth millions of naira were reported to have been destroyed after fire gutted a warehouse on Moshood Abiola Way, in the Ijora axis of Apapa-Iganmu Local Council Development Area (LCDA) Lagos State.

As gathered, the fire that started from a section of the warehouse and spread to other sections of the private facility used for storage of stock frozen fish and take-away plastic packs in the state.

The Guild learnt that the thick smoke oozing out of the building on Sunday attracted many passersby and resulted in raising alarm on the inferno that gutted the warehouse.

Eyewitnesses narrated that the fire was put out by emergency officials over three hours after the fire was discovered.

The Director, Lagos State Fire and Rescue Service, Margaret Adeseye, who confirmed the incident, said that the fire has been put out at about 2 pm, adding the cause of the fire is still unknown.

Adeseye, who noted that the efforts of the emergency officials prevented several adjourning properties from been destroyed by the inferno that started at about 11 am from a section of the warehouse.

On how they put it out, she said: “The Fire, which cause is yet unknown, was contained to the warehouse block where it emanated from while the other four warehouses blocks prevented from going up in flames. We are happy that there was no injury or death during the fire disaster”.