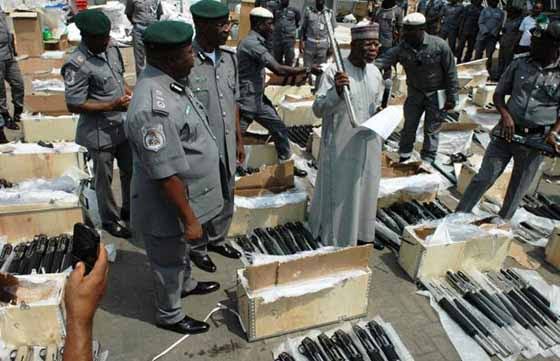 The Nigeria Customs Service (NCS) has intercepted a 40-feet container that was loaded with arms and ammunition at the Tincan Island port in Lagos State.

As gathered, the arms and ammunition were discovered in the sealed container by the law enforcement agency during a routine physical examination at the Tict Terminal.

Confirming the arms intercepted on Saturday, Public Relations Officer, Chief Superintendent of Customs, Uche Ejesieme, through a statement made available to newsmen, disclosed that the container was discovered yesterday.

“Consequently and in line with our standard operating procedure, the Customs Area Controller, Comptroller Musa Abdullahi has written to the Terminal Operators of Tict requesting that the said container be immediately moved to the Enforcement Unit of the Command for 100% re-examination” he explained.

Ejesieme further stated that the report of the re-examination and other necessary details would be communicated to the Comptroller General and the Zonal Headquarters for further directives in line with the Service protocol. 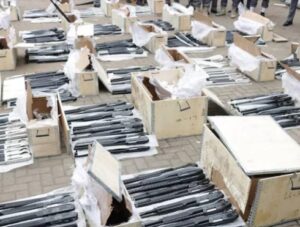 “We want to assure Nigerians that the Command will continue to decimate and degrade the activities of these criminal gangs whose unpatriotic activities are creating avoidable tension.” the spokesman added.

He equally stated that the Customs Area Controller is bent on getting to the root of the matter with a view to dealing decisively with any person or group of persons found culpable in the dastardly act and that, comprehensive details will be availed on the 20th of December, 2021.

The arms and ammunition discovery came barely 24 hours after the Nigerian Drug Law Enforcement Agency (NDLEA) arrested an arms dealer and recovered 64,000 ammunition from him.