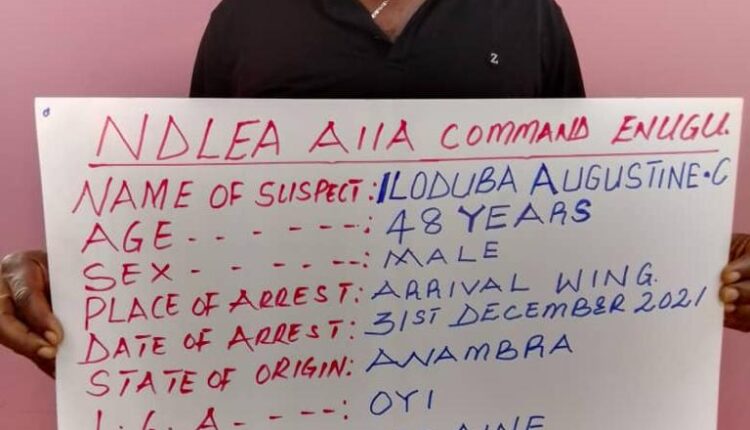 A 48-year-old Brazil-based man, Iloduba Augustine, has been arrested by National Drug Law And Enforcement agency, NDLEA, for excreting 58 pellets of cocaine in Enugu.

Augustine, who was a passenger of Ethiopian airline that arrived Akanu Ibiam International Airport, Enugu, from Sao Paulo, Brazil via Addis Ababa, Ethiopia was coming home for the new celebration on its eve when he was apprehended by the anti-graft agency.

During his arrest on two days ago, he was said to have been placed on observation during which he confessed to have swallowed 58 pellets of cocaine.

According to him, out of the 58 pellets he had swallowed, he excreted 48 pellets which were delivered to a Kenyan while on transit in Addis Ababa for a fee of N1million.

Augustine further said that he continued his journey to Nigeria with the remaining 10 pellets in his stomach, which according to him, he intended to sell in Lagos.

After his confession, the remaining 10 wraps of cocaine was later excreted at 10:40am on New Year day, after which the anti-graft agency detained him.

On his part, the Chief Executive, NDLEA, Mohamed Marwa commended the officers and men of Enugu Airport for their resilience towards fighting the drug war and ensuring that drug barons are always apprehended.

He further commended men under the Directorate of Operation and General Investigations, DOGI, for leaving a strong message in the New Year with their efficiency and determination to bring drug barons to book.