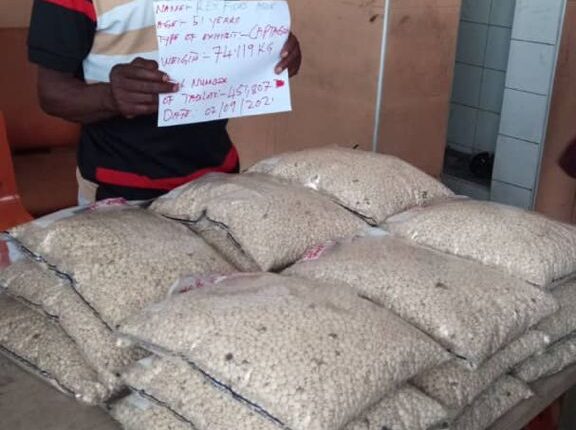 The achievements recorded by the Nigerian Military in the fight against Boko Haram were discovered to have been aided by financial losses recorded by the insurgents after N6 billion invested in procurement of drugs was intercepted and impounded by the National Drug Law Enforcement Agency (NDLEA) in Lagos.

It loads of Captagon, a brand of Amphetamine, in containers brought into the country through the Middle East, were intercepted by operatives of the Agency at the Apapa port in Lagos after they were about to be cleared by the port officials.

The insurgents, in a bid to prevent their arrest, ensured that the consignment pass through three countries and were transloaded by the importers in a North African country before been shipped into Nigeria.

Items intercepted by the agency were confirmed by the Chairman of NDLEA, Brig. Gen. Buba Marwa (retd) on Wednesday during a media briefing to update the public on recent seizures across the country including the insurgents’ drugs imported into the country.

Marwa, who condemned the evil intent of those behind the importation of illicit substances into Nigeria, assured that NDLEA would not rest until everyone connected to the consignments was arrested and prosecuted in accordance with the law of the country.

The chairman hinted that about six months ago, the agency received intel from international partners in the Middle East that discovered the shipment of illicit narcotics to Nigeria.

“We made the first attempt to examine the container on Thursday, August 26, 2021, and what we found inside the container were three pieces of marble polishing machines, otherwise called sanders”, the chairman added.

Marwa hinted that last month, NDLEA sniffer dogs turned up a positive indication on the rotor coil of one of the three machines that were shipped into the country.

“The next day, Wednesday, 1st September, 18,560 tablets of drug suspected to be Amphetamine (Captagon) weighing 3.2kg were found deeply concealed in one of the coils.

The following day, Thursday, September 2, the other two machines were dismantled, and in all, a total of 451, 807 tablets, weighing 74.119 kilograms, were discovered hidden inside their rotor coils”, the chairman said.

According to him, going by the street value of about $25 per tablet, the importer would have raised $11.3million, which is equivalent to N6 billion to procure the items.

“Imagine the impact of this drug in the hands of criminal gangs or a fraction of the profit from its sale being used to fuel criminalities across the country, we can think of our worst-case scenarios and they will still be farther from the repercussions that could be unleashed on the country.

“It may interest you to know that, as far as we know, this is the first time this drug is being brought into any African country South of the Sahara. This tiny, highly addictive pill, widely available across the Middle East, produces a euphoric intensity in users, allowing them to stay awake for days, making them fearless, predisposes them to reckless action that puts the lives of people around them in jeopardy.

“What should give any discerning Nigerian a nightmare concerning this drug is the fact that its production and sale is controlled by militias and large criminal groups in the Middle East. And beyond any doubt, Captagon has been linked to the escalation of the Syrian Civil War.

“A lot of seizures have been made since 2017, mostly in the Arabian Peninsula, and in Italy and Turkey, and the point of origination, almost all the time, were traced back to Syria and Lebanon. This gave rise to the theory that ISIS is behind the production and sale of Captagon as a means of generating funds for weapons and combatants, and for use as a stimulant to keep them fighting.

“Lest we forget, Captagon was the name of the drug found on the phone of the French-Tunisian terrorist who killed 84 civilians in France on Bastille Day in 2016. That is the drug we have on our hands now. If these facts are not grim enough, we should all remember a lesson from history, when in World War Two, Nazi Germany wreaked havoc across Europe with chemically-enhanced soldiers that the combined forces of Europe could not tame.

“This is the same condition we have presently with insurgents, bandits, cultists, robbers, kidnappers, and herders spilling rampaging across the country. Given the dark and dangerous background of Captagon, it’s not difficult to guess correctly that the destination for the seized drug is none other than the camps of insurgents and bandits all over the country”.

He assured Nigerians that the Agency would continue to work hard with support from local and international partners to block availability and access to all manners of illicit substances across the country.

“Given the Zero Tolerance of NDLEA for production, trafficking, and abuse of any illicit substance, our approach to this discovery couldn’t be casual. The first arrest has been made and we’ll not rest on our oars until every person connected to this shipment is arrested”, he added.