JUST IN: Tambuwal steps down for Atiku before primary voting… 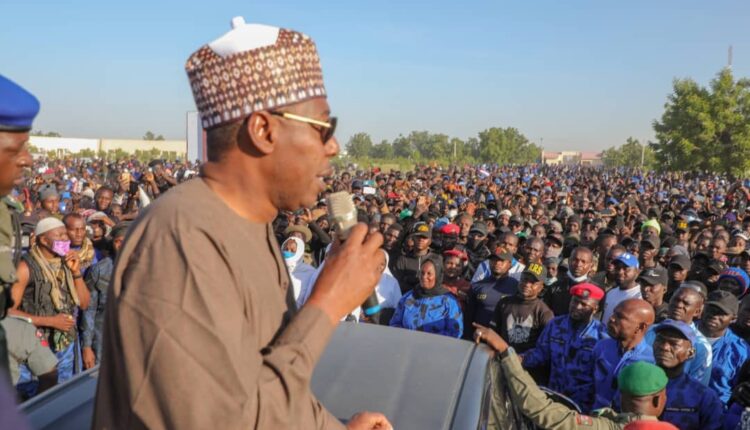 Borno State Governor, Prof. Babagana Zulum, has disclosed Boko Haram, alongside other terrorists were taking advantage of rising unemployment rate across the country to recruit youths with prices ranging from N5,000 to N10,000 in the state.

He added that the alarming data of unemployed youths roaming around without engaging in anything meaningful which exposes them as soft target had been the lapses been exploited by the terrorists group in recruiting more fighters with meagre amount and promises of better future.

The governor added that though his administration continues to provide incentives and other needed resources for military and Civilian Joint Task Force battling the insurgents, there was need for massive creations of jobs for the teeming youth population should the country be ready to defeat insurgency.

Speaking yesterday during his statewide broadcast to commemorate this year’s Democracy Day (June 12, 2021) and his second anniversary in office, Zulum described as saddening the grim reality of the Nigerian youths, adding that the situation should be treated as humanitarian crisis.

According to him, of all Nigeria’s 36 states, none is faced with the level of Borno’s security and by extension, social and economic challenges. From day one, we were faced with an acute humanitarian crisis, particularly in northern and some parts of the central senatorial zones.

He noted that in dealing with the crisis, upon assuming office, his administration made it a policy that as governor, he would personally lead as the chief humanitarian officer for different reasons across the state, saying on one hand, it was our duty to deliver help to our fellow citizens that were either internally displaced or taking refuge in neighbouring countries.

“On the other hand, there was the risk that insurgents could, after making IDPs socially and economically vulnerable, also explore that vulnerability by offering food and cash incentives to recruit fighters who could even serve as their spies in communities.

“From records, we have experienced instances when insurgents offered as low as between 5,000 and 10,000 Naira to recruit some spies and smugglers of weapons. We therefore needed to take steps ahead by making sure we regularly visit IDPs in all parts of Borno, including remote locations, to efficiently and sufficiently deliver food, cash support, and clothing. We needed to ensure that our good citizens had the support they needed, and they were not exposed to potential attractions for the incentives of insurgents.”

Zulum stated that in seeking an end to issues of insurgency, his government has continually supports IDPs and vulnerable citizens with cash to strengthen their resilience to Boko Haram manipulations, adding that Borno has thousands of volunteers who are being paid monthly allowances, provided with kits and vehicles to complement the military in the fight against Boko Haram.

He said: “It has been two years since we took the oath of office. In these two years, we have together, witnessed continued turbulence even though in the midst of shared hope, shared optimism, shared faith, shared resilience and communal determination to ceaselessly devote ourselves to freeing our Borno from 12 years of vicious insurgency.

“As part of that commitment, we, from our first day in office, made security our number one priority. My first activity as Governor of Borno State was to interface with the head of the military involved in the fight against insurgents.

In our first week in office, we interfaced with thousands of our volunteers from the civilian JTF, hunters and vigilantes, and we increased their monthly allowances, in addition to allocating to them more patrol vehicles and other logistics needed to enhance their operational roles of complementing armed forces in fighting Boko Haram.

In our combined approach, we took aggressive steps of recruiting thousands of hunters from different parts of northern Nigeria, mobilised and deployed them to accelerate our support for the military. We made it a policy that in all our 27 local government areas, volunteers were strengthened with additional recruitment, surveillance vehicles and other gadgets.”