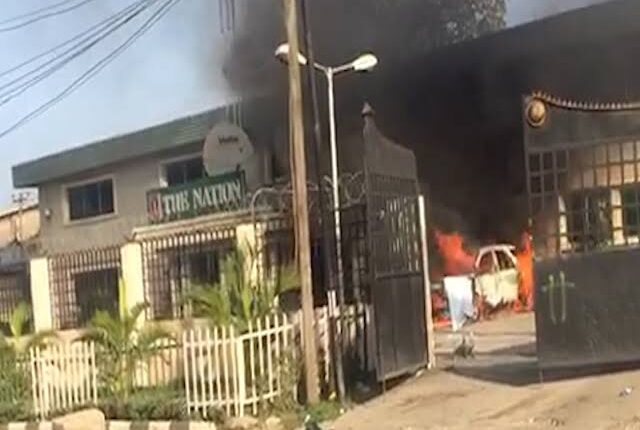 The Management of Vintage Press Limited, publisher of The Nation Newspaper, has narrated how armed men looted and torched down the news outfit during arsons that enveloped Lagos State after yesterday’s Lekki toll gate shootings that claimed lives of youths protesting police brutality.

As gathered, armed men on motorcycles stormed the headquarters of newspaper on Fatai Atere Way, Matori, axis of the state on Wednesday afternoon, a development said to have been reprisal attack by the irate mob.

Confirming the development, the Newspaper’s Editor, Adeniyi Adesina, said that the attack was premeditated as the whole scenario was too coordinated to be an happenstance.

According to him, in a commando-like manner, they kicked their way into the premises after scaring away security men on duty, brandishing their sophisticated guns.

Through a statement released on Wednesday, Adesina said that the attackers poured petrol on the building’s frontage and set it on fire after destroying valuables worth several millions of naira.

“Some of the vehicles parked within the premises were set ablaze, others vandalised
Many boys came thereafter and swooped on the office, looting everything they could lay their hands on. These include desktop computers, laptops, air conditioners and other office equipment,” the statement said.

Adesina added that the Newspaper’s Managing Director and Editor-in-Chief, Victor Ifijeh, was among those trapped within the office while the facility was being burnt.

“They were evacuated when men of Operation Mesa security outfit arrived. Their arrival ended the free rein of the invaders. It was obviously a targeted attack on the free press. The Nation had been listed on Twitter and other social media platforms by sympathisers of the ongoing destructive activities, as a target of attack.

“The Nation has robustly reported the protests fairly, giving voice to the agitation of youths for a better Nigeria. The Management is at a loss as to why the company should be a target of such unwarranted attack,” he said.