The All Progressives Congress (APC) leaders in Lagos may be enveloped in crisis management after council chairmanship and councillorship primaries across the state if intrigues and political maneuvering by some leaders to favour one aspirant over the others in the race to become the party’s standard-bearers ahead of the poll are allowed to linger particularly in Surulere Local Government, where the party structures have started falling apart.

The plans to influence outcomes of the primaries, not only that it had started provoking concerns among members on the leaders’ commitment to the true democratic practice, some have begun to consider not campaigning for the party going forward if their wishes and opinion will not be recognised within APC structure especially as it concerns their representatives in elected public offices.

Indeed, the concerns of these members, which had started raising dust ahead of the party’s council election primaries scheduled for May 29th, had been that the leaders should have alerted members before now on their plans rather than direct all aspirants to vie for the party’s ticket which resulted in 332 chairmanship and 1,053 councillorship contenders vying to become the APC candidates for the election slated for July, 2021 across the state.

Although the primaries are scheduled to hold less than a week, the exercise has been seen among members of the party especially in Surulere Local Government as about to be hijacked by some godfathers including Speaker of the House of Representatives, Femi Gbajabiamila, who has allegedly started using his position to influence the outcome of the primaries to majorly favour his preferred candidate for the seat.

Findings from party members in Surulere further revealed that Gbajabiamila, who currently represents the constituency at the Green Chamber, has declared his interest to determine who become the council chairman as well as councillorship and has started influencing all activities leading to the primaries in other to ensure his preferred aspirants emerge as APC standard-bearer for Surulere. 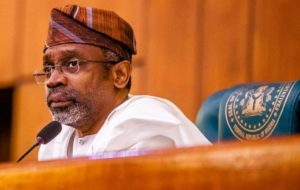 To further influence outcome of the primaries, the members revealed that the Speaker has abandoned his office in Abuja and relocated to Lagos, with his aides, and on arrival, he unilaterally conveyed a leadership meeting outside the council, particularly at Nigeria Air Force base in Victoria Island, where he picked the incumbent council Vice-chairman, Sulaimon Yussuf, as his preferred chairmanship candidate, as well as directed other aspirants to step down their ambition for him.

A top member of the party present at the meeting which started minutes after 10 am last Tuesday, May 19, 2021, who confided in The Guild, disclosed that he promised to give other aspirants appointments and contracts to cover expenses incurred on the campaign, even though the action did not go down well with other aspirants and party leaders that felt Gbajabiamila never consulted them before embarking on the plan.

He further disclosed that before now, Gbajabiamila, never informed any of the ward chairmen nor members of the party executive in the council of his plans on the primaries, allowing aspirants to purchase form before revealing his intention, saying this is unfair.

After the meeting, the source hinted that three candidates, who had earlier commenced campaign for the chairmanship seat through APC platform have stepped down their ambition, claiming that the Speaker had threatened that it was either they accept his offer or they face the consequences.

Of the nine aspirants, he listed the three aspirants that have collapsed their structure for the speaker’s candidate to include Abiola Ismail popularly called Designer, Bamidele Hussein, and the current Secretary to Surulere Local Government (SLG), Muiz Dosunmu.

But contrary to the directives, the five other contenders, Kuti Abiodun, Haleem Alaka, Idris Aregbe, Bili Balogun, and Hon. Braithewaite, as well as the incumbent chairman, Tajudeen Ajide, who was recently pardoned by Lagos House of Assembly over his alleged disregard for authorities, have vowed to carry on with their campaign ahead of the primaries.

Sources from the three other major contender’s camp claimed that they were not against the speaker from having a preferred candidate but should not use his status and political influence to hijack the seat from others, rather, allow everyone to compete favorably within the party.

A member of the Alaka campaign group said that their aspirant has rejected the offers presented by the speaker and rather than back down, has intensified his campaign towards reaching out to all stakeholders within the party to get their endorsement ahead of next Saturday primaries.

According to the source, the aspirant has printed more souvenirs and was already distributing as he embarks on a rigorous campaign across the wards, urging members not to accept the offer presented by the Speaker.

Another aspirant, Idris Aregbe, who is APC Lagos Youth Organising Secretary, and considered as the preferred candidate for youths women and many others, considering his antecedent within the council, it was authoritatively gathered, has also been compelled by his supporters not to accept any offer from Gbajabiamila and that he should continue with the campaign, just as some of the members have volunteered to go all out as well as ensure that he becomes APC flagbearer.

Also, Kuti, another aspirant that spoke exclusively to The Guild, disclosed that he rejected the speaker’s offer, not because of any reason but to ensure that true democratic values are enshrined within the party.

The aspirant, who added that efforts had been intensified to win more party members to his camp, said: “It is time to liberate Surulere from the grip of godfatherism and initiate programmes that could bring development to our local government”.

He noted that Gbajabiamila’s candidate, Sulaimon had been within the corridor of the council administration for over 20 years without any meaningful contribution to Surulere’s development, saying And the speaker want the party members to queue behind him again. Please we need to get this council back to where it truly belongs in Lagos.

Efforts to get Special Adviser to Gbajabiamila on Media and Publicity, Lanre Lasisi, proved abortive, all calls and messages sent to him were not returned or responded to, basically to clarify and debunk allegations against his boss.