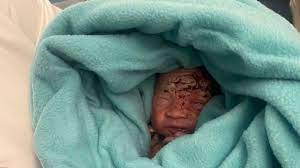 Cabin crew working with Mauritius national carrier, Air Mauritius, has presented a new born baby dumped by a female passenger inside toilet dustbin of one of the airline’s plane to police, upon landing at Sir Seewoosagur Ramgoolam International Airport in Madagascar.

Following the discovery of the baby, a 20-years old woman from Madagascar who was on the flight was said to have been arrested as she was suspected to have given birth and dumped the baby inside that dustbin.

According to the airport officers on Monday, the baby was said to have been discovered when the officials were screening passengers and carrying out their usual routine check out on passengers.

They stated that the baby was abandoned inside a black bag troway for farm road, adding that they had noticed blood-stained toilet paper in the toilet, they followed the trail and retrieved the baby after which they rushed the baby to a public hospital for treatment.

The officers during interrogations of passengers were said to have apprehended the suspected woman who had initially denied the allegations that the baby boy was hers.

However, the officials stated that they made her undergo medical examination which later confirmed that she had just delivered, noting that they have put her under police surveillance in the hospital and Both she and her baby were fine.

The Malagasy woman who landed in Mauritius on a two-year work permit would be made to go through interrogations after her release from the hospital and would be charged with abandoning a newborn baby.