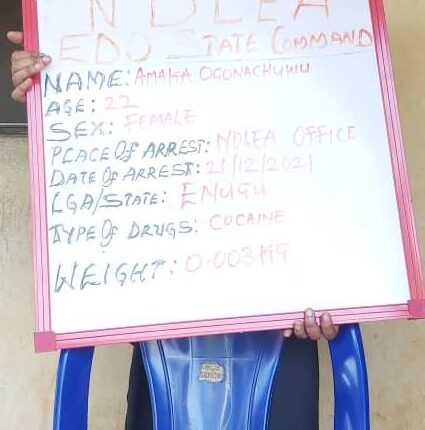 Efforts by drug cartels to push out millions of illicit substances through Nigerian borders to other countries during festive season have been frustrated after National Drug Law Enforcement Agency (NDLEA) arrested a 22-year-old lady for hiding wraps of cocaine in a cooked rice.

The suspected drug trafficker, Amaka Ogonachukwu, was arrested and detained by NDLEA officials while attempting to smuggle the drugs already concealed in a cooked white rice out of the country.

Ogonachukwu, during investigations, was said to have revealed to the anti-drug agency that the items found with her were been smuggled for her 40-year-old lover, Monday Imagbebenikaro, who was currently been detained by the agency for same offense.

In a related development, an outbound passenger to Italy on Turkish Airline, Ovire Cyril, has been held by the agency after he was found in possession of 114 wraps of heroin with a gross weight of 1.80 kilograms during routine search at Gate “C’ Departure Hall of the Murtala Muhammed International Airport, MMIA, Ikeja, Lagos.

During search of his luggage, he was said to have concealed the items inside the pockets of four jean trousers, packed in a black suitcase included in his belongings.

The Director, Media and Advocacy, Femi Babafemi, who confirmed these through a statement on Sunday, stated that the suspect who confessed that he was pushed into the crime by hardship after he lost his Job, claimed he was promised €5,000 if he successfully delivers the consignment to a client in Italy.

“Same day, during outward clearance of Ethiopian Airline passengers’ luggages at the same gate, a male passenger, Osakue Evbuomwan travelling to Milan, Italy was arrested with 1.55kg of Tramadol concealed in a ‘Ghana must go’ bag”. he added.

Earlier while commending the Commanders, officers and men of the Lagos, Edo and MMIA commands of the Agency for not letting down their guard, the chairman of the anti-drug agency, Brig-Gen. Buba Marwa (retd), assured them and their counterparts in other commands that his leadership would always reward exemplary performance while charging them to remain focussed and always aspire to surpass previous feats.