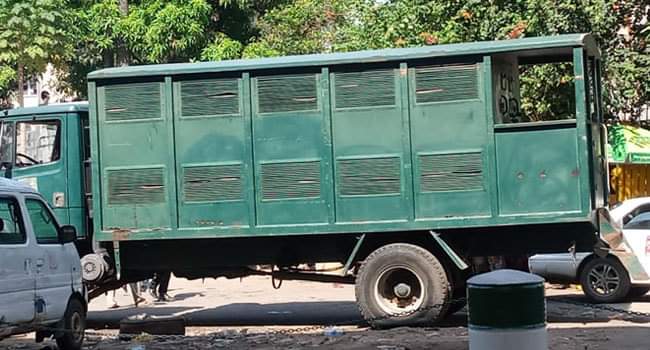 Judges, officials as well as other people who visited Lagos State High Court at Tafawa Balewa Square took to their heels after a set of hoodlums stormed the court premises in anger over the shooting of one of their gang members that was at the court for other activities.

As gathered, the hoodlums were said to have caused scenes within the court premises after one of them was shot by a Kirikiri Correctional officer who was trying to prevent one of the prisoners from escaping.

It was learnt that the victim, who realised that the inmate was about to escape, was about to assist him get off the hook of the correctional centre warders at the court, when he was shot.

Our correspondent learnt that after the warder shot the victim in the leg, his gang members present at the scene mobilised others and they took over the premises outnumbering the security officials deployed to maintain law and order around the court.

The new development within the court premises, it was reported, forced judges to end proceedings abruptly and immediately left the premises to avoid being attacked by the hoodlums.

An eyewitness told the Guild that the incident occurred at about 3 pm on Monday and that the hoodlums vandalised vehicles parked within the court premises and other valuable items worth millions of naira.

The eyewitness added that the officials that could not leave the premises before the atmosphere got tense, locked themselves in their various offices to avoid being attacked.

An official in the court, who did not want his name mentioned because he was not permitted to do so, narrated that a senior prison warder tried to prevent the warder from shooting but the junior officer turned down the directives.

After the security personnel yielded the floor to them, the hoodlums barricade the entrance of the court and deflated tyres of the Black Maria, demanding justice for their colleague.

Calm was restored to the court premises after a team of law enforcement officers from the Nigerian Police, Lagos Command was deployed to the court to restore law and order around the public facility.

The Public Relations Officer of the Nigerian Correctional Service, Lagos State Command, CSC. Rotimi Oladokun, who confirmed the incident, said the suspect, was shot in his leg by NCS operatives who foiled the escape attempt.

In a press statement, Oladokun said: “Persons suspected to be associates of an inmate taken to the Lagos High Court for hearing, staged an attack on the escort personnel with an attempt to forcefully release the inmate while at the premises of the Court. However, the quick response and vigilance of the NCoS court escorts thwarted their effort.

“A security reinforcement was immediately deployed to the court premises to prevent a breakdown of law and order. And All inmates have been successfully returned into secure custody of the Correctional Service. During the ensuing melee, one of the attackers’ was shot while trying to dispossess armed personnel of his rifle.”