Hong Kong bans flights from USA, 7 others over COVID-19 measures 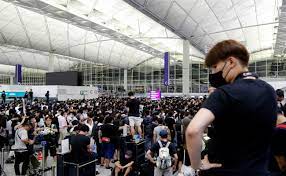 Hong Kong has announced its plans to ban flights from the United States of America and seven other countries over its introduction of series of new measures to curb the spread of Covid-19 across the country.

Hong Kong authorities stated that the travel flight bans on eight countries would last for two weeks as it would begin on January 8, 2022 in order to ensure that the virus is well contained.

Other seven countries on Hong Kong’s flight red list aside USA include: Britain, Canada, Australia, Pakistan, Philippines, France and India which would be denied access into the city for two weeks.

While making the announcement on Wednesday, Hong Kong leader, Carrie Lam, stated that the government is set to introduce a series of new measures to curb the spread of COVID-19, as the global financial hub was on the verge of another outbreak.

According to her, the health officials in the country had predicted that a fifth wave of the virus and it was only necessary for the government to enforce measures that could help the country prevent the outbreak and save life.

She said: “We have to contain the pandemic to ensure that there will not be a major outbreak in the community again,” Lam said at a news conference, adding that the city is “on the verge” of another surge.

“The measures came as new omicron clusters have emerged over the past week, many linked to several Cathay Pacific crew members who broke isolation rules and dined at restaurants and bars in the city before testing positive.” she added.

Also, Lam disclosed that Hong Kong authorities have launched a city-wide search for the contacts of a COVID-19 patient and ordered a Royal Caribbean, “cruise to nowhere” ship to return to port early based on health officials fear for a fifth wave of infections.