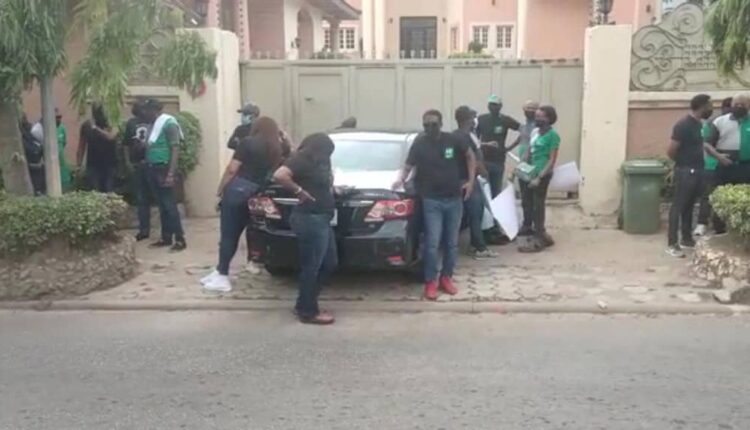 In what appeared to be a new strategy by commercial banks to get customers to repay loans, some staff of Heritage Bank were reported to have stormed residence of a senator formerly representing Anambra State, Andy Uba, over a loan they alleged the former lawmaker obtained years back and was yet to fulfill agreements made to the financial institution.

The scores of staff were said to have besieged the former lawmaker’s house in Federal Capital Territory (FCT) Abuja, taking over the entrance of the building and demonstrated, requesting that Uba pay up the loan allegedly obtained from the bank.

Demonstration of the financial institution’s staff at the alleged home of Uba was seen in a video that was accompanied by a voice, presumably that of one of the protesting staff, circulating on social media.

In the video monitored by The Guild on Monday, except for the voice that explained that the women and men seen at the entrance of a gate were staff of the commercial bank and that they were at the home of Uba to recover a loan taken by the politician, there was nothing to link the house and the demonstrators.

From the video, the presumed staff were seen to have worn Jean trousers and Polo-shirt to home of the said lawmaker and were alleged to have been armed with placards to express their displeasure over the unpaid loan.

In the one-minute video, one of the protesters, who did not state categorically details of the debt, said that they were appealing to the former lawmaker to pay his loan and that his response would keep the hundreds of staff working at the financial institution on their job.

“Senator Andy Uba has been owing the bank for a couple of years now, and we are here for a very peaceful meeting with him to ask him to repay those loans because those are depositors’ funds,” the unidentified staff said in a recorded video from the scene.

“And those monies, if not repaid, will throw the number of people you see here with their families out of work. And you know the situation of the economy now”, the staff voice added.

Efforts to get the Central Bank of Nigeria (CBN) and Heritage Bank management to respond to the tactics adopted and the video that had circulated all over the social proved abortive.