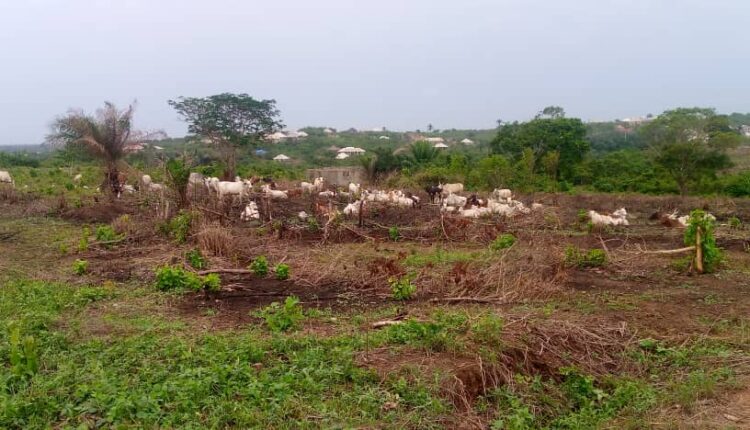 Farming activities in some parts of  Epe Local Government in Lagos State have been halted following Fulani herdsmen’s invasion of farmlands and attacked owners, forcing them to flee from the community to prevent further injuries.

The herdsmen. who were said to have migrated from Igangan in Oyo State, have settled on the large expanse on Iganke farmland owned by the Ali Moibi-Balogun Family of Odo-Egiri Town in  Eredo Local Council Development Area (LCDA) and were already erecting their structures on the land.

Following eviction, the Ali Moibi-Balogun Family has written a petition to the Lagos State Governor, Babajide Sanwo-Olu and the Inspector General of Police appealing for their immediate intervention to address the issue and help reclaim their land from the herdsmen. 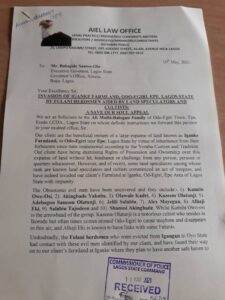 In the letter already received by the governor, dated May 10th, 2021, and signed by its solicitor, Adeyemi Adegbite, which was sighted by our correspondent, which was titled invasion Iganke Farmland, Odo-Egiri, Epe, Lagos’.

From the letter sighted by The Guild, the family stated that they resorted to the letter after the Nigerian Police station in Noforija in Epe had allegedly termed them, suspects, after they complained that their farmland was already invaded by the herdsmen and that they were already threatening to wreck more havoc within the community.

The family said: “We hereby most humbly urge your Excellency to deplore your very good offices to intervene in this matter, cause a very discreet investigation to be conducted, and ensure that our society is not turned into a lawless one where might is right and where power can be hijacked by a few powerful and privileged individual or group of individuals to the detriment of the common and law-abiding citizen”.

Ali Moibi-Balogun added that they were the beneficial owners of a large expanse of land housing Iganke Farmland, “by virtue of inheritance from their forbearers since time immemorial according to the Yoruba Custom and Tradition”.

They noted that they have been exercising “Rights of Possession and Ownership over this expanse of land without let, hindrance, or challenge from any person, persons, or quarters whatsoever”.

The family argued that the “herdsmen’s incursion on the land was first noticed on the 4th March 2021, where they were spotted heavily armed with dangerous weapons like guns, long daggers, and amulets suspected to be charmed. 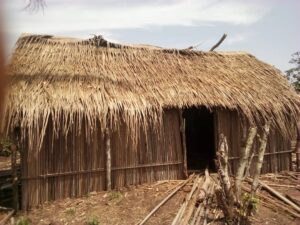 According to them, the invaders initially took their time to cut down trees for the framework of their huts. “Our client watched as the invaders covered the woodwork with palm leaves. And now they are on the verge of erecting permanent concrete structures. Also, they have come with their young ones and cattle. (Photographic evidence is attached herewith).

The family noted that the herdsmen, on arrival, forced their staffs, who were on the farmland, had to run “helter-skelter to save their dear lives having been shot at sporadically. Presently the whereabouts of a pregnant woman is unknown.

“The invaders initially took their time to cut down trees for the framework of their huts. Our client watched as the invaders covered the woodwork with palm leaves. And now they are on the verge of erecting permanent concrete structures. Also, they have come with their young ones and cattle.

On 22” April, 2021 another attack was carried out on our client, this time on their (our client’s) residence. As we speak, the herdsmen are fully settled and are chasing everyone away, threatening our client’s lives unending and the police at Noforija has lost hope of combating this menace its compromise been rumored?

“We were reliably informed that these devilish people acted in concert with some other accomplices within our client’s community amongst whom is fingered the traditional rulers Baale of Odo-Egiri, Chief Abiola Oluwo Olapekun. It is very certain that Olawale Kadri led the herdsmen and their cows into the town”.

The family added that the clerics were allegedly assisted by some land speculators popularly called Omo Onile, that were known to often trespassing on resident’s land.

“Whilst Kamilu Owo-Osi is the arrowhead of the group, Kazeem Olatunji is a notorious cultist who resides in Ikorodu but oftentimes comes around Odo-Egiri to cause mayhem and disappears to thin air, and Alhaji Eki is known to have links with some Fulanis”.