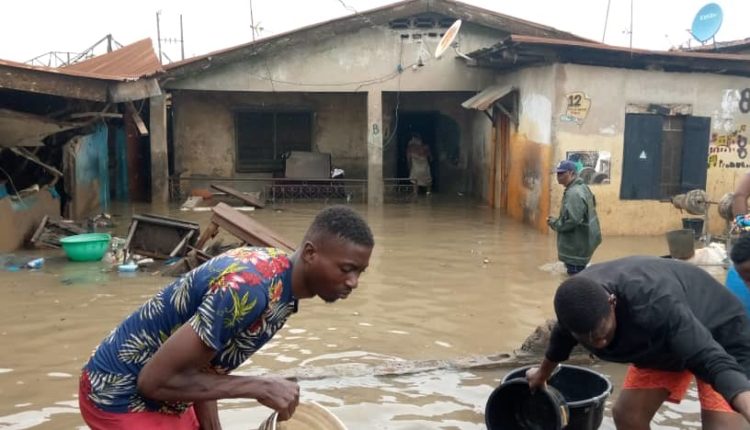 For occupants of No12, Hassan Adejobi Street, Papa Ashafa in Orile Agege area of Lagos State they might have to begin arranging for emergency shelter as a replacement for their flooded place of abode after Thursday overnight downpour that started on a lighter mode rendered them temporarily homeless.

Before rescue comes their ways, some of the occupants may have to relocate elsewhere and leave the flood that has sacked from their homes reign for a while.

But no thanks to COVID-19 that came with shutting down of schools and religious houses that would have served as a respite to pupils and families affected by the flood after the downpour.

Although, their story was not different from neighbors and other residents on the street who were also facing similar challenges after they woke up to their house coming under serious flood leaving women and men as well as children scooping water out of their homes.

For them to have their houses back, entire families occupying houses in the area would have to labour hard to remove no fewer than 20,000 liters of water out of the houses if they must return to their place of dwelling.

Confirming the incident, the Lagos State Emergency Management Agency (LASEMA) said no fewer than twenty families were displaced in the area with a mother alongside her daughter getting injured at 12, Hassan Adejobi Street, around 6:00 am as a result of flooding.

LASEMA’s Head, Public Affairs, Nosa Okunbor, through a statement released to newsmen on Thursday, explained that the preliminary report of the agency observed that the flood collapsed a fence on the 6 rooms bungalow boy’s quarters, and was also responsible for dislodging occupants of a 10-room bungalow domiciled in the same compound when it was submerged.

“It was further revealed to the Agency’s officials at the incident scene that 2 victims (an adult female and her female child) living in the affected building (boy’s quarters) sustained minor injuries and were taken to a hospital before the arrival of the Agency’s LRT.

“It was further observed that 3 other compounds were also affected by the flood. Presently about 20 families have been displaced by the flood. Furthermore, the LRT conducted a post-disaster assessment of the affected areas and also sensitized the residents on general safety measures,” the statement read.

Away from havocs wrecks on home, the torrential rainfalls also hindered the free flow of traffic across Lagos as motorists and commuters jostle desperately on the highway for the right of passage in getting to their respective destination.

The rains which started on Wednesday and continue till Thursday saw areas like Agege, Agungi, Lekki, Ajah, Victoria Island, Ogba, Beger, Yaba, Oworonsoki, among others flooded with road users spending no fewer than five hours on the road locked down in traffic as the flood.

Speaking with our correspondent, a banker, Dolapo Awodele, who works on the Island and lives in Ojodu-Berger, explained that she got to her office around 12 pm due to the gridlock despite leaving her house around 7:30 am.

Also, Adebayo, another Lagosian who lives in Ajah while explaining his ordeal to our correspondent, noted that the rain made it hard for commuters to get a bus to their various destinations as there were fewer buses with inflated prices on the road.

“You know the outbreak of coronavirus and the government directives on social distancing had influenced transport fares across the state with fares doubling the normal price before the pandemic. So, the bus operators took advantage of the rain to inflate prices and commuters have no option than to accept take the bus or risk being drenched and also get late to work,” he said.

Meanwhile, Lagosians also took to Twitter to express their frustration with pictures and short video clips of flooded areas in Lekki, Ajah, Agungi axis among other areas of the state.

However, their ordeal may not be unconnected to an earlier announcement by the state government which advised residents to brace up for the year’s rainfall and its accompanying inconveniences.

Recall that the government had in March enjoined residents of the state to prepare for likely consequences of 240-270 days rain after the prediction that the 2020 rainfall would begin on March 19 and possibly end on Nov. 22.

The state’s Commissioner for the Environment and Water Resources, Dr. Tunji Bello, who disclosed this while briefing newsmen on the 2020 Seasonal Rainfall Predictions and Prevention of Flooding in Lagos following the 2020 rainfall prediction by the Nigerian Meteorological Agency (NIMET), said the prediction for Lagos in 2020 was a near-normal one, and that Ikeja was expected to have about 1,526 millimeters, while Badagry was 1,759 millimeters.

“Seasonal Rainfall Prediction (SRP) is to allay fears of residents and prepare them ahead for the likely consequences of the rain. Lagos Island is expected to have a rainfall onset date of March 19, with an error margin of three days, while its cessation date is expected to be Nov. 26.

“It is also expected that Lagos Island will have about 252 days of rainfall and about 1,714 millimeters of rainfall over the year. It can be deduced that Lagos State shall experience a rainy season of 240-270 days, while the maximum annual rainfall is predicted to be 1,750 millimeters.

“The Year 2020 will likely experience days with extremely high rainfall amount which may result in flooding. Another contributory factor to possible flooding in the state is sea-level rise.

“This poses the biggest risk to coastal areas and the state’s drainage infrastructure, as anytime there is high tidal movement, it may “lock-up” the discharged points of drainage channels and until it recedes, there will be no discharge.

“Such occurrences also caused backflows, resulting in flooding but as soon as the Lagoon recedes, all generated stormwater run-off will immediately discharge and our roads will be free,” Bello had said.

Lagosians be lowkey feeling like they're in venice, Italy.. #Lekki pic.twitter.com/7bz9WC8t3Q

Best way to move around from lekki to Ajah and Dolphin 🐬 Estate #Lekki pic.twitter.com/mebeCKVLOD

Just In: Woman dies after mudslide in Lagos